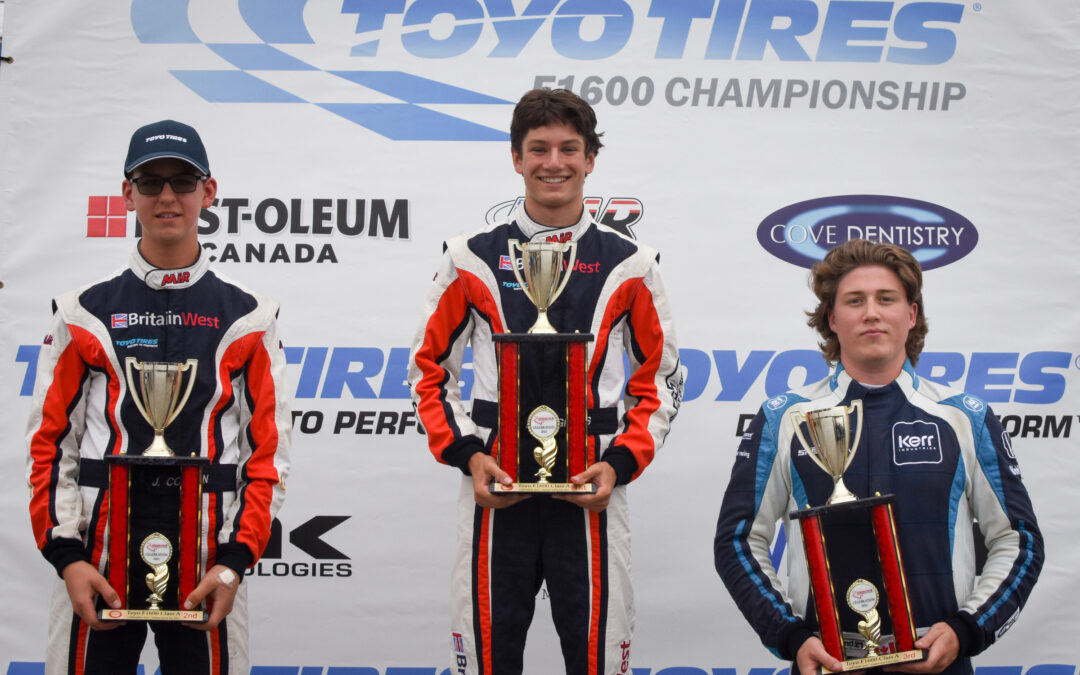 The Toyo Tires F1600 Championship Series hit the track for the final time over the weekend as the 2021 finale went off at Canadian Tire Motorsport Park. It was the Canadian Automobile Sport Clubs’ annual Celebration of Motorsport, and 25 drivers were welcomed by beautiful fall weather to begin the weekend. The Round 6 finale was a customary tripleheader with one run on Saturday and a pair on Sunday to wrap up the season. Nick Gilkes confirmed the Series’ championship with his first weekend sweep in A class, while Steve Bodrug matched the feat with a P1 podium sweep of his own in B class.

After an optional practice day Friday and an official practice run Saturday morning, cars were up just before lunchtime for qualifying and drivers were putting down the fastest laps of the year. None did it better than Jake Cowden, as the Round 4 pole sitter was intent on capturing another. He posted a 1:28.2 on his second flyer to lead the way in the first half of the session, and in the back half he put down a 1:28.079 second lap to get within a breath of the CTMP F1600 track record! He wouldn’t get another shot though, as just after the time posted the track went red with a car off in turn one. Gilkes joined him on the front row, over a half-second back on the clock, with Jonathan Woolridge and James Lindsay on row two. Connor Clubine posted P5, moving up in class after securing the B class championship, while Kai Dalziel posted P6 in his first series’ start after coming across from Nissan Sentra Cup competition. Andrew Mason posted the fastest lap in B class, one that put him P12 overall. Dylan McPherson and Bodrug were next and lined up directly behind Mason on the grid.

Race 1 rolled off just before 3pm and it produced a run reminiscent of the first weekend of the season. A lead train of eight cars ran together from start to finish, with the entire race completed under green flag conditions. Woolridge, Cowden and Gilkes each took turns at the front, while Clubine, Sam Baker, Lindsay, Dean Baker and Connor Wagland were also involved at the sharp end. Gilkes sat third through the middle stages as the lead pair repeatedly exchanged the point, before moving into second on lap eleven and into the lead on twelve. Woolridge then responded on thirteen, but Gilkes dropped his fastest lap of the race to go back to the lead on fourteen and held it at the checker for his fifth win of the season! Woolridge was second, and Clubine third after a wild final lap. First, Sam Baker looped it at Moss Corner to fall down the order, and just moments later at the other end of the straight, Cowden was looking to go around Woolridge in turn eight when Woolridge washed out and forced Cowden even farther out! A trip across the grass ended in the wall, and opened the door to the podium for Clubine.

Lindsay was then fourth, Dean Baker the Hard Charger of the race in fifth, and Wagland sixth. Dalziel was seventh in his debut ahead of Graham Lobban, Sam Baker and Brent McPhail. Bodrug won the B class in P12 after maintaining a one-car buffer over McPherson most of the race. The rookie got behind the leader once in the late stages, before falling back to P14 overall on the next lap. Mason had trailed Bodrug early, but when his car’s handling went off he fell to fourth in class working through the middle of the race. He was upgraded back to podium position late, as Mike Lee had issues of his own in turn five and Mason got back through.

The final race day of the season dawned polar opposite with low lying clouds and rain, and drivers were forced to deal with a much different race track in Race 2. Cowden was on pole position once again, joined on the front row by Woolridge. Gilkes and Sam Baker were on row two with Clubine and Lindsay on row three. Cowden led the first lap, twenty seconds slower than his pole lap in the dry, but on this day Gilkes had confidence and feel like no other. He took over the lead on the second lap, then consistently extended it by multiple seconds at a time. He was over four seconds up the road through lap four, and just past eleven seconds clear through lap eight when yellow flags waved and a red flag ended the run. Lindsay had gone off in turn four and made contact with the wall on driver’s right, contact that would end his season early. Woolridge was second for the second-straight race, and Cowden was third and just behind.

Clubine had a steady run in the wet outing, and had moved to P4 on the last racing lap before the red flag, but Sam Baker got the spot back when scoring reverted one lap after the red flag finish. Clubine was then fifth, Dean Baker sixth and Wagland seventh. Lindsay was classified eighth, Lobban ninth and Dalziel tenth. B class had Bodrug leading McPherson once again, but this time with no buffer car in between. They were just outside the top ten in the first part of the race, but as the errors of others added up, Bodrug gradually progressed to P10 overall in securing his second-consecutive class win. It changed one position in post-race scoring, but he was still on top of the blocks. McPherson was next up, claiming his tenth podium result of the season, with Mason making it a carbon copy podium in third.

Gilkes was champion-elect when Race 3 rolled off and he was on pole position doing so with teammate Cowden alongside. Woolridge and Clubine were on row two ahead of Sam and Dean Baker on row three. He then proceeded to produce one of his most dominant wins of the season, confirming it with the fastest lap of the race on the final tour. The margin was over thirteen seconds in a thirteen-lap race, and the outcome was never in question. P2 was a much different affair, as Cowden and Sam Baker were never far apart. Cowden held the upper hand through the first five laps, but Baker took it on six before Cowden replied and held to nine. The pair then swapped the spot every lap the rest of the way, with Cowden owning it the critical final time across the line: Cowden second and Baker third. The dicing brought Clubine into play as well, and he was just off the back of Baker crossing in P4.

Dean Baker was next in the final race of the season, fending off Woolridge as the pair shared track space. Wagland did the same to Dalziel for seventh and eighth, with Lobban following in ninth and McPhail tenth and the Hard Charger of the race. Just as in the first two starts of the weekend, McPherson was chasing Bodrug in B class and was producing his best effort yet. He was three tenths behind with one to go, and got even closer around CTMP the final time! Ultimately, Bodrug held the spot, completing a weekend sweep by just 0.113! Lee completed the top three in B class with a well-deserved podium result.

The next officially scheduled event for the Toyo Tires F1600 Championship is the season-ending banquet on November 13th. For the most up-to-date information as events approach, please continue to visit formula1600.com and follow the Series on Facebook and Twitter.