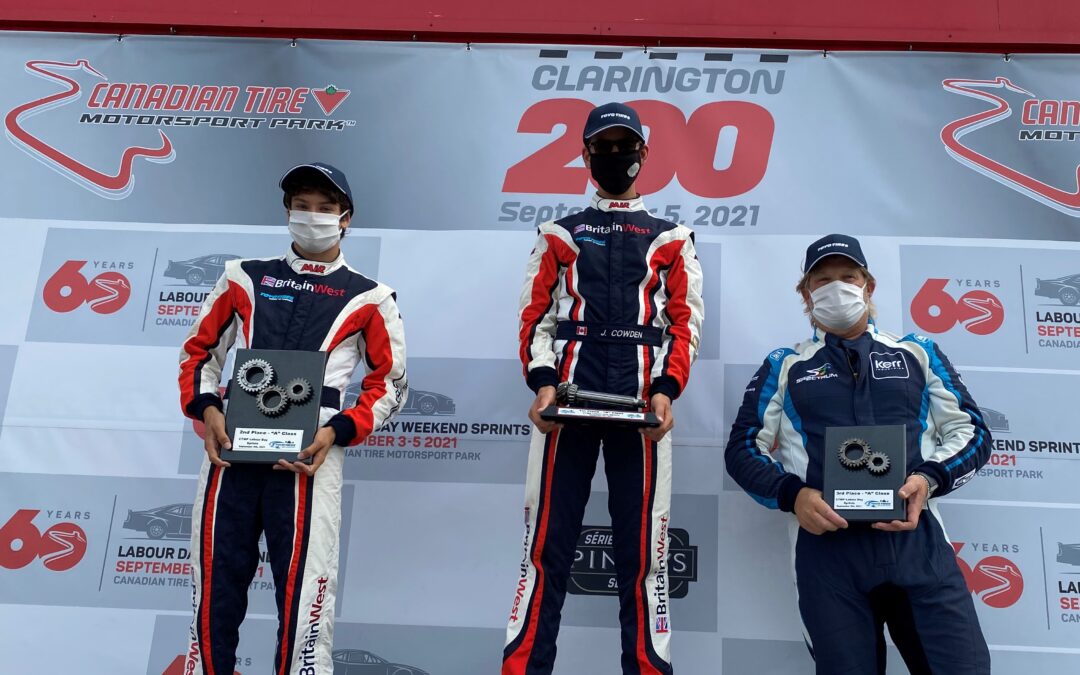 Just two weeks after its last start, the Toyo Tires F1600 Championship Series kicked off the second half of its schedule over the weekend, competing as part of the Canadian Tire Motorsport Park Labour Day Sprints. The weather was fully cooperative for a field of 22 cars on hand, and for the first time this season there were three different winners in an A class tripleheader: Nick Gilkes, Jonathan Woolridge and Jake Cowden. In B class Connor Clubine remained undefeated at CTMP on the year, sweeping his way to win number eleven as he added to a commanding championship lead.

Fans were on hand for the first time this season as well, as the NASCAR Pinty’s Series was the lead bill with a doubleheader event. An extensive schedule meant the F1600 drivers actually had qualifying late Friday afternoon, and in doing so brought the first day of action to a close. As might have been expected after morning practice, point leader Gilkes was quickly to the top of the time charts, as he was into the 1:29 bracket from his first flying lap and led the way from early on. A number of drivers actually pitted during a lengthy half-hour session, and when returning for the second half Sam Baker capitalized on a good tow up the back straight to post a 1:29.095 on lap ten! Gilkes then did his best to respond on eleven, nearly matching it with a 1:29.100! As the laps played out, the lead pair remained the same, and Baker took his first career pole from timed qualifying by just five one-thousandths! Most recent winner Woolridge was third on the grid after posting his best lap on his final lap, and Connor Wagland was fourth after producing his best early on. Jack Polito was fifth, also posting his best lap early, and Cowden completed the first three rows as the only other driver to break 1:30 around CTMP.

Race 1 was Saturday morning, the first race of the weekend overall, and the paths the lead pair took to the checkered flag could not have been more different! In a fully green run, Gilkes went flag-to-flag in scoring a massive ten-second victory. He consistently edged out his lead while those behind diced for position, and had the margin nearly triple on lap thirteen when the podium trio was all but confirmed. Baker and Woolridge had swapped second spot through the early laps, and Polito also got involved racing toward the middle stages. He had slotted into third himself by lap six, but on lap eight Woolridge looked to get the spot back running into turn eight, only to lose grip and have a spin! Then, on lap thirteen, Baker and Polito had issues themselves while racing into lapped traffic in the same corner and the door to the podium was thrown wide open. Cowden moved into second and Woolridge was back to third! With two to go Woolridge took back the runner-up position, sealing a run that saw him go from second, to sixth, and all the way back to second – only to then receive a two-position penalty after the race for being out of position at the start! That handed second back to Cowden!

For his part, Cowden had scrapped with Dean Baker and James Lindsay early on before establishing himself in sixth, got fifth from Wagland nearing half distance and moved into fourth when Woolridge fell down the order. He inherited second after the lap thirteen drama, before ultimately taking the final flag in third and being upgraded once again after the race. Sam Baker had then salvaged a podium result, with Woolridge fourth after the penalty was applied. Wagland crossed fifth and right behind Baker on track, while Dean Baker was sixth after turning his fastest laps late in the race to emerge from a battle with Lindsay. Clubine was next in crossing eighth overall and first in class. The B class actually crossed in order in Race 1, with Hard Charger Dylan McPherson next after getting by Andrew Mason on the last lap!

Best lap times from the opening run then set the grid for Race 2 Saturday afternoon, and it was an all-BGR front row with Woolridge on pole from Polito. The second row was the BritWest tandem of Gilkes and Cowden, with Sam Baker and Wagland lining up on row three. The first race lap quickly shuffled the order though, as Gilkes led the first time across the line from Woolridge and Cowden. The second race was actually much different than the first, as through the first seven laps of the race four different drivers took a turn at the front. After Gilkes led the opening pair, Woolridge and Cowden swapped the lead over the next four laps before Sam Baker got to the head of the line for laps seven, eight and nine – the lap that proved decisive on two different fronts.

Polito was also running in the lead pack and had advanced from fifth to podium position in what would normally have been the first half of the race. ‘Normally,’ because it was about to be cut short. Running lap nine Polito was caught out in turn three, and Cowden had nowhere to turn as he raced upon the scene. The pair were then stranded in the centre of the track after contact, leading to full course caution flags waving and the race being called early two laps later. That was one deciding factor, and the other was the fact Woolridge got by Baker in turn eight prior to the track going full caution, and that proved the winning move! No penalties came after this one, and Woolridge had his fourth win of the season from Baker and Gilkes – the remaining trio from the lead pack of five. Behind them action was also intense, as Dean Baker, Wagland and Lindsay were sorting what became fourth, fifth and sixth. Through nine race laps, Wagland stole the lead spot twice, but each time Baker had an answer and ultimately crossed ahead. Lindsay was sixth running next up from start to finish, with Brent McPhail behind him after sorting mechanical issues that robbed him of a top-ten result earlier in the day. B class cars then completed the top ten overall, with Clubine rebounding from P15 after the first lap to take another class win! Steve Bodrug was second in class in scoring his seventh podium result of the season, and Mike Lee was the Hard Charger overall and third in class.

While Cowden obviously didn’t get the result he was looking for, he did set the fastest lap of the race and was therefore on pole position Sunday morning for Race 3 with Polito alongside. Gilkes and Woolridge were on row two, with an all Baker Racing third row, Sam clocking ahead of Dean by just two thousandths of a second. The first run was all green, the second ended under yellow and this one saw the red flags wave just after action got underway. Tire contact during a jumpy start led to Woolridge crashing out and Sam Baker, Lee, Andrew Mason and Henry Knox were collected in the process as well. With the carnage on the front straight, the field filed into pit lane to await clean up and a full restart.

The second time around nine minutes remained on the race clock, enough time for a six-lap run to end the weekend. Polito led the first three laps from Gilkes and Cowden, but he went around at Moss Corner working lap four and opened the door for a BritWest shootout. Gilkes led through four and five, but on the final lap Cowden produced the winning move up the Mario Andretti Straightaway and into turn eight, securing his first F1600 win! P2 was an eleventh podium result of the season for Gilkes, who extended his lead in the championship as a result. Wagland, Lindsay and Dean Baker were in close confines once again in Race 3 looking to settle the final spot on the podium. Each took a turn at the head of the line during the first four laps, Wagland at lap four after setting his best lap of the race. Lindsay then got it through five when he responded with a personal best lap of his own, only to have Baker follow with his personal best on six where he got by both to take it! Clubine was just behind in taking the B class honours once again, followed in by Polito, McPhail, McPherson and Bodrug.

Recognized in the Cove Dentistry Master Class at round four were Mike Lee, after going from a pit lane start to P12 in Race 1; Brent McPhail, after running to a season-best P7 in Race 2; and Kari Salo, who was +8 and the Hard Charger of the day in Race 3.

The Toyo Tires F1600 Championship will contest its penultimate round at Canadian Tire Motorsport Park September 18/19 as part of the BEMC Late Summer Trophy Races. For the most up-to-date information as the event approaches, please visit formula1600.com and follow the Series on Facebook and Twitter.