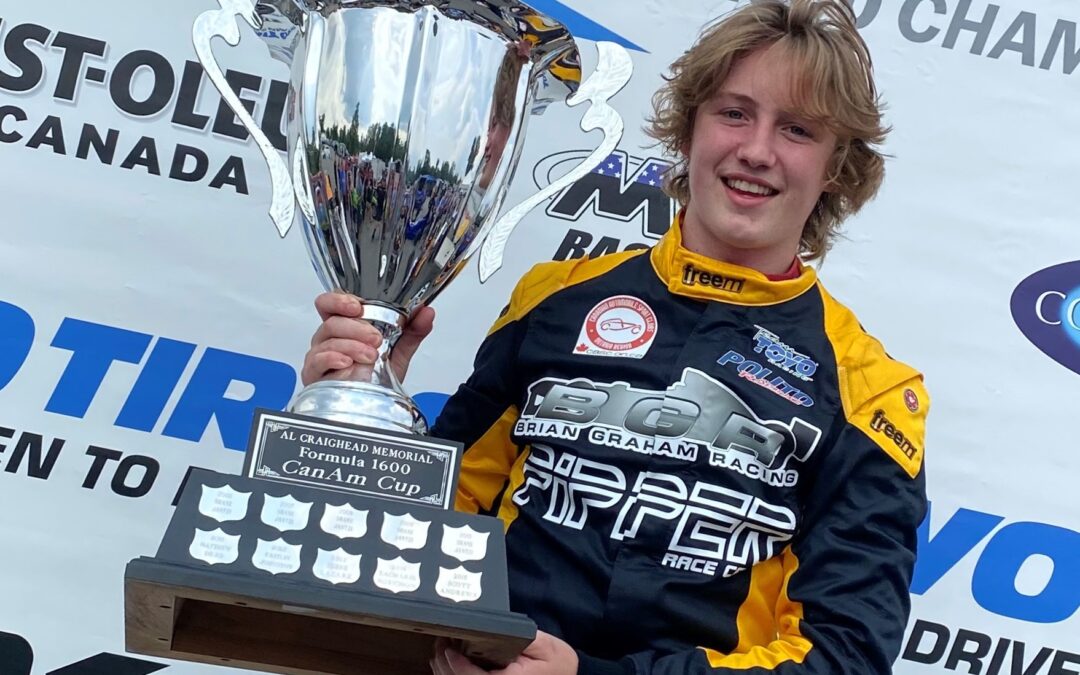 The Toyo Tires F1600 Championship Series took its show on the road last weekend as the third event of 2021 took place at Calabogie Motorsports Park. The Calabogie Summer Classic saw nineteen cars in the paddock over the weekend, one that brought much different weather than round two. Temperatures were scorching hot, over 100° under pit awnings, and as has become the series’ norm – the racing was scorching hot as well. Jonathan Woolridge swept the Sunday starts in A class after Jack Polito won the opener, and in B class Connor Clubine scored bookend wins with newcomer Henry Knox winning the other.

After a single morning practice session, qualifying rolled off just past 11:30 Saturday and drivers had few chances to nail the perfect lap. With each tour covering 5km at Calabogie, drivers knew beforehand they would only clock five or six laps at best in a fifteen-minute session. As it was, Nick Gilkes only needed one to claim his third-consecutive pole position, as his first turned out to be the best at 2:13-flat. The first two laps of the session actually set the first six rows of the grid, as none up front went faster after that and the order didn’t change. Woolridge qualified off pole, with Jake Cowden and Polito on row two. Connor Wagland was on the inside of row three, meaning the five drivers that were chasing Sam Baker in the standings all lined up in front of him. Baker was sixth, ahead of Graham Lobban, James Lindsay, Dean Baker and the fastest qualifier in B class, Clubine.

Just over two hours later the field was lining back up for Race 1, a race run in memory of formula car legend Al Craighead and contesting the prestigious CanAm Cup over 22 minutes. One of the most coveted trophies in Formula 1600 racing, it is awarded annually after the first race of a championship weekend. After contests at CTMP and Shannonville the last two years, this year drivers would have to tame Calabogie to get their hands on the hardware – and one definitely shone above the rest. Things got off to a slow start though, as a car off in turn four on the opening lap led to caution flags waving. Lap two was the true first flyer, and Gilkes led from Woolridge, Polito, Cowden and Wagland. Yellows waved once again on three unfortunately, as contact in turn five led to a lengthy caution period, but it ended at the completion of lap five, setting the stage for a three-lap shootout for the Cup!

Gilkes once again led the first fast lap of action, but Polito was the man on the move Saturday afternoon. Already up from fourth to third on the first green lap, he improved once again on the second green lap after setting the fastest lap in the field. One more after that he was up front and into the lead, and just one lap later the checkers were in the air and he had his first series win! Gilkes crossed in second, Woolridge third and Cowden fourth, all fairly spread out. Wagland was fifth after recovering a position he lost to Sam Baker at the start, Graham Lobban went the distance in seventh, Dean Baker advanced to eighth passing two cars in the final laps and Clubine was ninth in winning the B class and extending his streak to seven. Joining him on the B class podium were Knox and Jean-Guy Fornier.

In setting the fastest lap in the field on his way to his first win Saturday, Polito also claimed pole position for Race 2 Sunday morning where Wagland joined him on the front row ahead of Sam Baker, Gilkes, Cowden and Woolridge. This one was much different as it went flag-to-flag under green, but similar in the fact that a BGR car was on the move from the get go. Woolridge was fourth after the first race lap, advanced to second with the fastest lap in the field on two and lowered it again on three when he took over the race lead! From there he managed a gap on Gilkes over seven laps that followed, and in the end scored his first race win since the series’ opener back in June. For his part, Gilkes had jumped to second on the opening lap and led through two before dropping a spot. He kept the leader honest throughout before scoring the middle step of the podium uncontested. Polito got shuffled back to sixth through the opening three laps before settling in, then set his best laps on three and five to move back forward as he capitalized on activity in front of him. He was an isolated third in the end, and on cruise control toward this third-consecutive podium result.

Altering the order was Wagland first, racing for a podium position retired after a hair-raising moment with a stuck throttle! A few laps later Clubine in turn two ended up watching from the sidelines when he locked up racing A Class driver Sam Baker. That left Cowden and Baker dicing for fourth, with the latter closing in and getting the spot on the final lap. Behind them came a trio that was producing some of the closest racing on track. Dean Baker, Graham Lobban and James Lindsay were in close quarters through much of the race with Lobban controlling sixth and Baker getting seventh on the final lap. Lindsay was then eighth, with series’ newcomer Knox crossing next and winning the B class in ninth overall. Steve Bodrug was the Hard Charger of the race and second in B class after climbing eight spots, and Dylan McPherson produced a similar charge from the back to complete the B class podium.

Just as with the first run, the winner in the second also set the fastest lap in the field so it was Woolridge on pole Sunday afternoon with Gilkes alongside, a race that came after significant rainfall leading up to the start. In a tale of two halves, Gilkes commanded the first five laps in tricky conditions while Woolridge controlled the second half of ten laps, just as he had in the morning run. In the end, four-tenths separated the pair as Woolridge produced his second win of the weekend to put his name firmly back in the championship hunt! Gilkes took over the championship lead in finishing second once again, in what was his eighth podium result of the season. He was joined on the blocks by a Britain West Motorsport teammate in Race 3, as after a race-long battle Cowden crossed just ahead of Polito.

Clubine was back to his winning ways in B class as he crossed fifth overall and very much isolated, followed in by the Baker racing father-son tandem of Sam and Dean Baker. Knox was chasing Baker in a run that earned him second in B class, while Brent McPhail was ninth overall ahead of Bodrug, once again the Hard Charger of the race and onto the final step of the B class podium. Lobban and Lindsay were also running inside the top ten during the race, but each experienced a big moment during the run that saw them fall down the order, Lindsay in turn eight and Lobban in turn twelve. Wagland was also in the thick of things early on, but was forced to pit lane on lap four with gearbox issues.

Recognized in the Cove Dentistry Master Class at round three were Jean-Guy Fornier, after his strong run to the B class podium in Race 1; Dean Baker, as the top Masters’ finisher in races 2 and 3; and Steve Bodrug, after his two Hard Charging runs that led to a pair of podium results!

The Toyo Tires F1600 Championship returns to Canadian Tire Motorsport Park September 3-5 for the CTMP Labour Day Sprints. For the most up-to-date information as the event approaches, please visit formula1600.com and follow the Series on Facebook and Twitter.