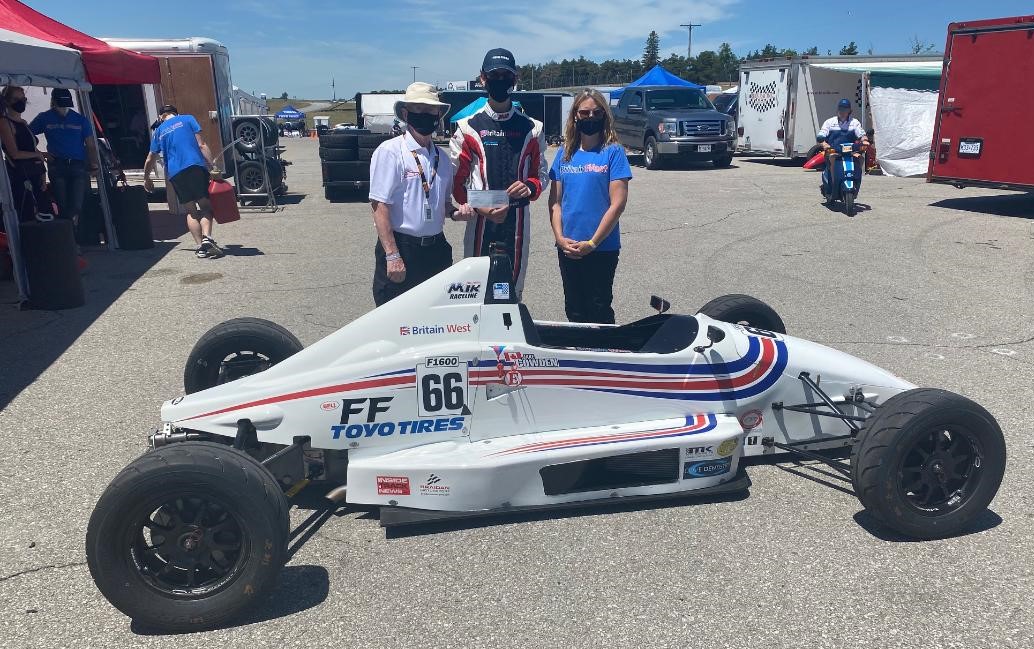 The Toyo Tires F1600 Championship Series held its season opening event on Father’s Day weekend at Canadian Tire Motorsport Park. Along with traditional awards to podium finishers, it was also the event where rookie Jake Cowden was presented with the Bob McCallum Scholarship by Canadian Automobile Sport Clubs – Ontario Region President, Gunter Schmidt. The scholarship was made possible by a generous contribution to CASC-OR, with the requirement to identify, encourage and foster new motorsport talent within Ontario, and provide financial assistance to the scholarship recipient.

A grade eleven honour student at Aurora High School, Cowden joined the Series after five seasons of karting at Goodwood and Mosport Kartways. Despite the ongoing pandemic, 2020 proved to be the teenager’s highlight year, as he captured major titles including a KartStars National Championship, Goodwood Club Championship and a special event title on Canada Day at Mosport. This season brings the next step in Cowden’s racing career as he joined the Toyo Tires F1600 Championship Series for his first season of open-wheel racing in formula cars.

In his debut with the well-established Britain West Motorsport team, he qualified P3 and by the final race of the weekend he was standing on the podium after finishing third in one of the most competitive fields of recent memory. He’s noted as having set his sights on Rookie-of-the-Year Award, and if his first weekend is any indication he will certainly be in the running as he sits second among rookies and fifth overall in the championship.

Cowden is a driver who is determined both on and off the track, and we offer him congratulations and wish him the best of luck going forward in the Toyo Tires F1600 Championship Series and in his motorsport career.

The Bob McCallum scholarship was established in 2019 to provide financial assistance to first-year Motorsport competitors competing in F1200, F1600 or Formula Libra in the Canadian Automobile Sports Club – Ontario Region. Bob was an exceptional professional and dedicated motorsport enthusiast. He was the longest standing President of the British Empire Motor Club (BEMC), Formula Ford competitor, car constructor and race official. He was also an integral part of the CASC-OR Race Committee where he was appreciated for his analytical view. He was present at many CASC-OR race events working as a scrutineer, a role perfectly suited to his talents.