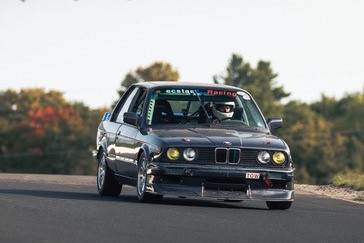 As our rookie introductions for the 2021 Toyo Tires F1600 Championship Series continue today we have Jonathan Brooks, from Carleton Place, Ontario. Like many before him, kart racing was one of his earliest endeavours but this driver has added some significant track time on top of that, much of it done during track days that took him to a number of famous race venues. Those experiences led him to endurance racing categories, and now he’s ready to shift gears into Canada’s most competitive open-wheel racing environment. An adventurer that has taken on everything from the 24 Hours of Lemons at Road Atlanta to Death Road – the Bolivian mountain pass made famous on Top Gear – Brooks is freshly married, his 2000 Van Diemen is freshly built and he’s all set to take to the track in early May. Formula1600.com recently caught up with him to sort out all the details.

How long, and what, have you been racing?
My experience in racing started off very casually, when some friends and I did arrive-and-drive karting post-university – but the dream was always to race on larger circuits. That grew into doing track days and driver education and experiencing as many different race tracks as I could. After about six years of this, I yearned for competition, and a friend and I ended up flying down to Road Atlanta to race in the 24hrs of Lemons with a team of American ex-fighter pilots. That really kicked off racing for me, and after a few races led us to buy a race-prep’d E30 for endurance racing in CER – Canadian Endurance Racing (formally Chumpcar). Formula 1600 will be a new challenge, and I am thrilled to put my skills to the test against such a competitive group of drivers.

Why racing? How did you get into it?
I’ve always been a car nut, and in university joined the Formula SAE racing team where we designed, built, and raced an open-wheel car each year against universities from across the globe. That really kick-started my interest in formula racing, but at the time I never imagined being able to race in a series such as F1600. When I learned about the series a few years back, it became my personal goal to join the series.

Have you driven an F1600 car before this season?
Never! This will be breaking new ground for me.

What is your # and why did you choose it?
There’s really no special story to number 55, it’s just been “my number” for as long as I can remember. I wore it in hockey as a kid, and always had to have 55.

What track raced has been your favourite?
Tough question, as each track has so many unique features that make it great. If I have to pick one, it would be Watkins Glen. The track has such a rhythm to it, no room for error, and is situated in a beautiful area. I also proposed to my wife while there…

What is your greatest racing memory, either as a driver or spectator?
My first race in a road car, in the 24hrs of Lemons, with a very uncommon layer of snow across the grass surrounding the track. They said, “put the Canadian in, they know how to drive in this.” They may have been slow cars, but going three-wide down through the esses with snow on either side is pretty unforgettable. We had a squeegee in the car that we would use to wipe the inside of the windshield while going down the back straight. I remember getting out after my first 45-min stint cold, wet, and out of breath… and nothing could have wiped the ear-to-ear grin off my face!

Who is your favourite driver from any generation and why?
My favourite driver is Ayrton Senna, because he exemplified what it means to be not just a racing driver, but someone dedicated and passionate in the pursuit of one’s goals.

What are your goals for 2021 and beyond?
My goal in 2021 is personal development. My pursuit of racing a full season in F1600 is about accomplishing something I’ve never done before and applying myself to constantly improve as a driver and as a competitor. The goal is always the top step – but what I take away from the experience means more to me than a trophy. Beyond 2021, I hope to become a regular part of this great community and continue to develop myself as a competitive driver in the series.