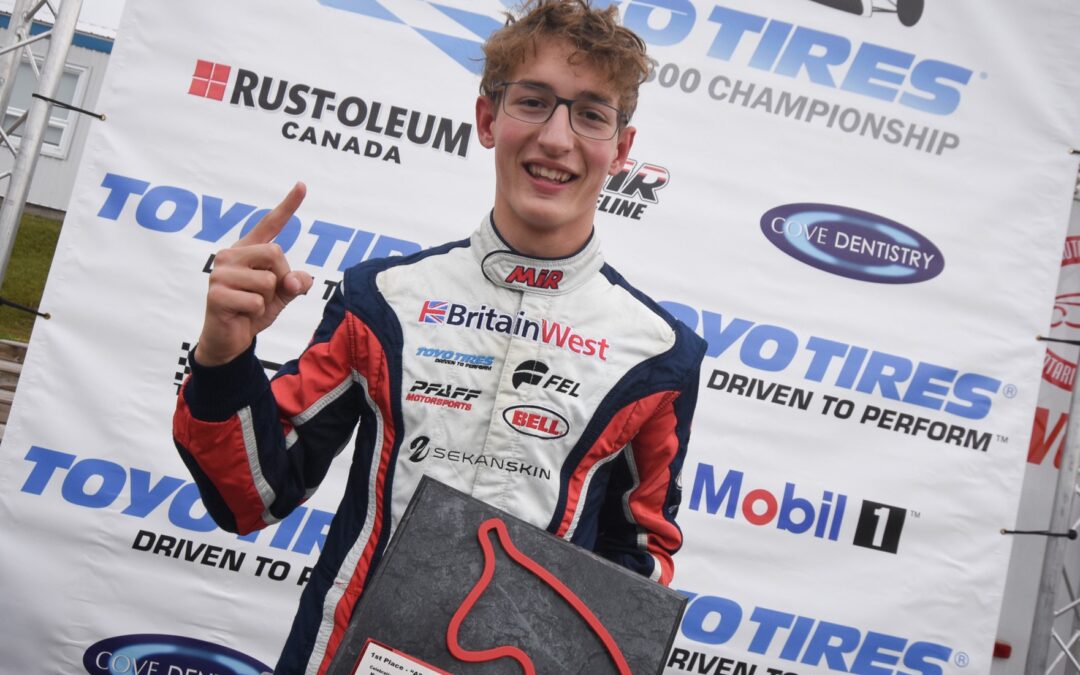 After a single weekend off, the Toyo Tires F1600 Championship Series was back at Canadian Tire Motorsport Park over the weekend to contest its fifth and final round, the Canadian Automobile Sport Clubs’ Celebration of Motorsport. Brisk fall weather welcomed 17 drivers overall, with 8 drivers in A class and 9 rolling off in B. Mac Clark and James Lindsay had already secured overall championships for 2020, and the celebratory atmosphere remained as drivers and teams concluded the year that almost wasn’t.

Qualifying just before midday Saturday saw Clark (Britain West Motorsport/Mygale) post the first time at 1:30, but Megan Gilkes (Brian Graham Racing/Piper) bettered it on two with a 1:29. Clark returned on three with a 1:28, then set the best lap of the session on four when he posted a 1:28.232 second lap when the rest of the top five failed to find time. Connor Wagland (Burloak Cycle/Piper) went P3 on the next lap, only to have Graham Lobban (Jaftrman’s Garage/Van Diemen) go quicker as more and more cars went under 1:30 around CTMP. The front row remained the same the rest of the way, Gilkes also entering the 1:28 range, and Lindsay (Britain West Motorsport/Van Diemen) secured P3 near the end of the session when he posted a B class track record at 1:28.922! Lobban completed the second row, followed by Jack Polito (Brian Graham Racing/Piper), Dean Baker (Baker Racing/Spectrum), Wagland and Andrew Mason (Mason Racing/Van Diemen) with each clocking 1:29.

Race 1 Saturday afternoon saw Clark go flag-to-flag over thirteen laps. Eight of those laps were run under green, and he lowered the fastest lap of the race five times! The first four-lap segment saw both Clark and Gilkes get comfortable at the front, the leader four seconds up on second, and second with the same gap on third. Graham Lobban held that spot at the beginning, but Lindsay took it working lap three as the pair were racing in a pack that also included Polito and Wagland. Full course caution then came working four, as Lindsay and Polito made contact in turn nine, looking for the same piece of asphalt, leading to damage to Lindsay which stranded him trackside. The second stage of the race then followed the safety car through the next four laps, before five more under race conditions at the end.

Much the same as the first green run, Clark quickly got down to business and then some. He broke his own F1600 track record on lap nine, bettered it on ten, then did it again on eleven with a 1:28.190 second lap to build a three-second cushion. Gilkes did the same in second to create an identical gap on Polito, the rookie driver leading a group that raced within a second of each other and then included Graham Lobban, Wagland and Keith Lobban (Deep Thought/Van Diemen) in pursuit. The lead pair cruised to the top two steps of the podium from there, with Polito maintaining third from Wagland, the hard charger of the race. In B class Connor Clubine (Britain West Motorsport/Van Diemen) took his second win of the season after gaining spots early and then clicking off consistent laps at 1:30. He set his best of the race on ten, and crossed seven seconds clear of Mason in second and Bill Tebbutt (Blue Dread Racing/Van Diemen) in third.

Clark and Gilkes were right back on the front row Sunday morning when they took the grid according to fast laps but the race got off to a messy start when Polito spun from P3. The caution flags went up and the red flew shortly after as a complete restart was called. Casualties from the wreckage included Mason, Clubine, Tebbutt and Sean Johnston (Britain West Motorsport/Van Diemen). With the field then reduced to 12, the second attempt ran green to checkers. As has become the norm, Clark was in a class of his own out front as he led by four seconds after the first flier and fourteen seconds through five! The teenager from Campbellville, Ontario, then cruised through the middle stages before producing another fantastic finish. He set and reset the fastest lap of the race on ten, eleven, thirteen and fourteen en route to a twenty-second margin and pole for Race 3. Gilkes was isolated in second spot, but required much more effort early on as she and BGR teammate Polito repeatedly swapped the position through the first half of the race. Once wriggling free, Gilkes stretched the gap to ten seconds by the final flag in what proved a repeat of the A class podium from a day earlier.

The battle in the race covered the next four positions as Graham Lobban, Baker, Wagland and Lindsay were often within a second of each other and changed order eight times across the line. Lobban held the lead position early before beginning to swap the spot with Baker through the middle portion of the race and falling to third in the line at two-thirds distance. From there he took second spot back, and led the line through twelve, thirteen and under the Last Lap board. Baker saved his best for last though, and produced his fastest lap of the race on fifteen to lead the group and take fourth overall as the race hard charger. Lobban was fifth, Wagland sixth and Lindsay seventh as the B class winner ahead of Steve Bodrug (Speedpro/Van Diemen) and Jeff Bateman (JB/Citation) on the second podium.

The final race of the season produced many similar storylines to the previous two. Clark got away from pole in Race 3, once again setting and resetting the fastest lap of the race, this time on six consecutive laps from the start! This time though, Gilkes was just three seconds behind at half distance as she didn’t have to contend with others in the opening phase. But working lap eleven, the BGR driver had to take evasive action to avoid a spinning car in turn eight and a bumpy trip across the grass meant Clark was then long gone. For his part, Clark managed affairs from the front in all conditions, running well clear on his way to his fourth weekend sweep from five events and fourteenth win from fifteen starts – an incredible sophomore season to be sure! Gilkes also had an impressive campaign racing back at home, as from thirteen starts she made eleven trips up the podium steps. Overall on the season the pair finished one-two in eight of ten starts together at Canadian Tire Motorsport Park.

Once again in Race 3, the action to have an eye on came behind the lead pair, as a group of up to six drivers was racing for the final spot on the podium and were rarely more than a second apart! Baker held the spot through the opening laps before Polito worked forward and got it on lap six. They swapped again on eight, before contact on nine dropped both from contention! Graham Lobban then raced into podium position, before Lindsay got by two laps later himself to be the fourth driver to have the podium spot. In the end the B class driver took third overall, with Lobban taking third in class – a just result for the pair. Wagland was next after climbing from eighth on lap one, and Bodrug got by Keith Lobban on the final lap of the season to finish second in B class and sixth overall. Clubine was next in line and the hard charger of the race after starting at the back, followed in by Johnston and Kari Salo (KTS/Van Diemen) who were third and fourth in class.

In the final Toyo Tires F1600 Championship A class tally, Clark won fourteen of fifteen starts for Britain West Motorsports and amassed 420 points on his way to wrapping up the title with a round to spare. Gilkes was second overall with 275 points, and second on the podium nine times as well. Jonathan Woolridge was third, Graham Lobban fourth and Polito completed the top five.

In B class, Lindsay confirmed back-to-back championships on the strength of thirteen wins from fifteen starts. Just as with Clark in the Brit-West stable, the only time Lindsay didn’t win was when he retired due to contact. Clubine was second after a pair of wins and nine trips up the podium, Mason was third, Bodrug fourth and Johnston fifth.

The Toyo Tires F1600 Championship is Canada’s premier open-wheel racing series, contested by both veteran racers and up-and-coming motorsport stars. The series features open-wheel race cars powered by both Ford and Honda motors, and provides one of the most cost-effective forms of formula car competition in racing. Canadian Tire Motorsport Park is home to the Toyo Tires F1600 Championship, and the series also visits Calabogie Motorsports Park and Shannonville Motorsport Park during a normal season. Each championship round consists of an official practice session, qualifying session, and three feature races spread over two days. For more information, please visit formula1600.com