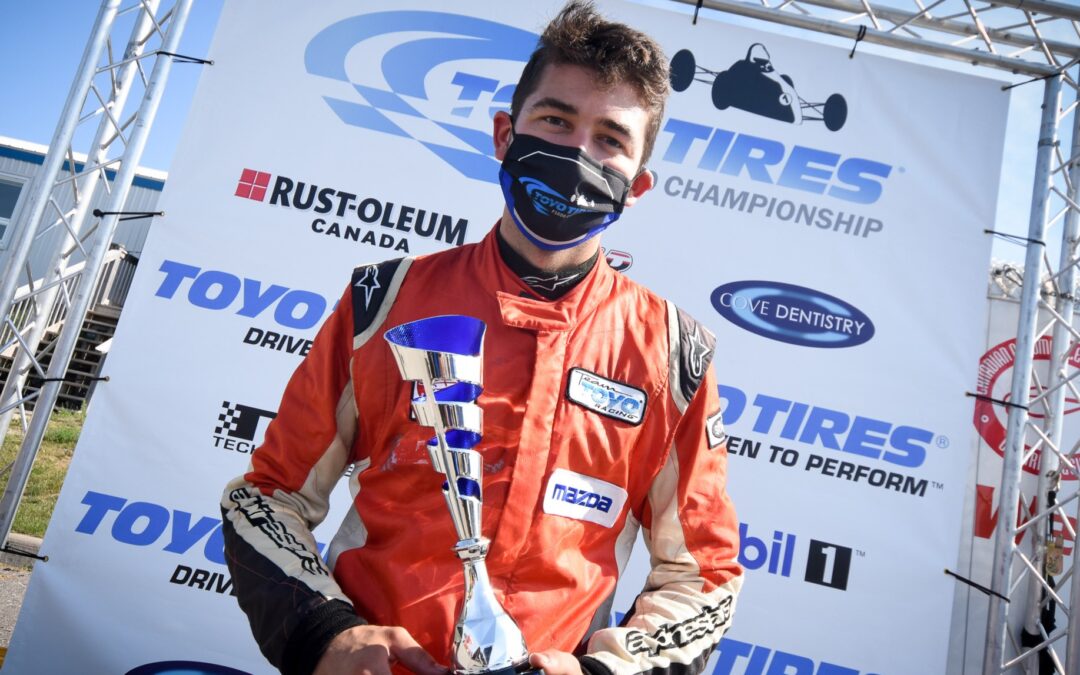 Drivers and teams in the Toyo Tires F1600 Championship Series were on familiar ground last weekend as they returned to Canadian Tire Motorsport Park for the British Automobile Racing Club’s Canadian Touring Trophy Races. The second round of the 2020 championship saw 21 drivers in the paddock, with a tripleheader race weekend producing three different winners and ten different pilots on the podium! James Lindsay now has a B class win streak on the cusp of double digits dating back to last season, while a wild Race 1 saw Connor Wagland score his first series win in A class before Mac Clark put his stamp firmly on Sunday proceedings.

After getting back into the groove with a Friday practice day and another session Saturday morning, a pair of battles developed for the inside line in qualifying. Championship leader Clark (Britain West Motorsport/Mygale) and Megan Gilkes (Brian Graham Racing/Piper) were flipping pole position back and forth while her stablemates Jonathan Woolridge and Jack Polito were doing the same with P3. Just past halfway in the session Clark was on top with a 1:29.2, but Gilkes responded on her next lap with a 1:29.0, the cars lapping a full second quicker than at Round 1. Clark then lowered his best on lap nine, before uncorking the fastest lap outright on ten with a 1:28.895 that secured pole from Gilkes. On row two, Woolridge went P3 on lap nine, Polito responded on ten, only to have Woolridge go even quicker on eleven! The front two rows were all under the 1:30 mark this time out in qualifying, with just 2.2 seconds covering the top nine cars. Wagland (Burloak Cycle/Piper) rounded out the Fast Five, while Andrew Mason (Mason Racing/Van Diemen) was the highest qualified B Class car in P8.

A great start by Gilkes saw her assume the early lead in Race 1 Saturday afternoon, followed by Woolridge, Clark, Sam Baker (Baker Racing/Spectrum) and Polito through the first flying lap. Little did they know – all five would have eyes for victory but in the end, none would get it! Gilkes, Clark and Woolridge wrote the first chapter, as they created a gap of nearly five seconds on the field through the first five laps. The plot then unravelled for each on lap six coming up the back straight. With racing paused due to a caution flag exiting Moss Corner, the trio were then eyeing the next marshall post where green flag racing would resume. Clark had a run on Gilkes, while Woolridge had a run on both and was looking to race three wide toward the Canadian Tire Bridge. Gilkes moved left from the inside line in defending her position, Clark moved further left in response while Woolridge was charging up the outside. Each had designs for the lead, but none would come to fruition as contact resulted, setting off a chain-reaction crash involving all three! Gilkes got the worst of it, briefly taking flight before a hard-hitting landing, thankfully right side up. Woolridge ended parked alongside in the barriers, while Clark had to take to pit lane for a tire change before resuming at the back of the field.

From all of that chaos, Baker assumed the head of the line and was just over one lap from his first career win when the race restarted! Wagland and Polito were in pursuit, and it all came down to the final turn. Baker had successfully defended from both, but contact in the final turn sent the leader spinning. This also derailed the drive of Wagland, and past both came Polito to race under the checkered flag! He held that victory ominously overnight though, as he was called to the Steward’s Office for a Sunday morning meeting due to passing earlier in the race while the track was under full-course caution owing to the back straight crash. In the end, he was sent to the back of the field, and Wagland was back on top of the blocks! Graham Lobban (Jaftrman’s Garage/Van Diemen) then owned the second step in A class and Dean Baker (Baker Racing/Spectrum) completed the first podium. Lindsay (Britain West Motorsport/Van Diemen) actually had third on the track, second on paper and first in B class! The podium was completed by Bill Tebbutt (Tebbutt Racing Enterprises/Van Diemen) and Mark McDonald (Bad Company Motorsports/Van Diemen).

While Race 1 obviously didn’t end as he would have hoped, Clark was right back at the head of the line Sunday morning as he had the fastest lap in the field. Woolridge also returned to the fray, while Gilkes was sidelined with extensive damage including a bent frame. Clark got right down to business at the wave of the green as he set the fastest lap on four consecutive tours in establishing a lead of over a half second from Woolridge. Polito kept in touch running third, with fourth becoming a four-way dice between Wagland, Dean Baker, Sam Baker and Lindsay. A caution period then occupied the middle of the race, the elder Baker exiting at turn eight after contact, and when racing resumed, Woolridge set the fastest lap of the race and took over the lead. Clark took it right back working lap nine, then set his fastest laps of the race on ten and eleven to create a winning margin.

Polito was also turning his best laps in the late stages, and after closing to the back of Woolridge on ten, took over P2 running lap eleven to set the A class podium: Clark, Polito, Woolridge. Behind them, Wagland, Sam Baker and Lindsay picked up their scrap after the caution period as well, with Baker working to the head of the line to secure fourth. Lindsay and Wagland swapped fifth before Wagland confirmed it, while Lindsay did have his fifth-consecutive B Class win of 2020 in crossing sixth. He was joined on the B class podium by Connor Clubine (Britain West Motorsport/Van Diemen) and McDonald repeating in third.

It was an all-BGR front row for Race 3, Woolridge on the point after establishing a new race-lap track record at 1:28.822 seconds in race two. The mark edged Thomas McGregor’s time from 2013 by just 0.086! Polito was alongside at the start, but it was Clark that led into turn eight in what would prove a wire-to-wire victory. The Piper teammates produced a great scrap for second through the first ten laps of the race, and as they exchanged the position seven times Clark was left free to stretch his legs at the front and generated a seven-second gap on the pair over the same time period. The outcome was never in question, and in the closing laps the podium became clear as well when Woolridge worked away from Polito. Behind them was a great battle for fourth, eventually settling into Sam Baker versus Wagland. While they stayed in the same order for the majority of the race, they were never far apart and the time difference at the stripe was less than a tenth!

The best action on track was produced in the back half of the top ten in Race 3. Ranging from three to seven cars, the lead position was at times held by: Dean Baker, Lindsay, Graham Lobban and Mason with Keith Lobban, Clubine and Hallman also in the fold. Baker relinquished the front of the line exiting turn nine in the late stages, and Mason bowed out of the battle for B-class win when a clutch issue led to his car sticking in fourth gear. That caused the group to spread somewhat, and it came down to Graham Lobban and Lindsay with two to go. Lindsay produced the group-winning move on the penultimate lap, while at the same time securing a B class sweep of the weekend’s racing and extending his class win streak to nine going back to last season. Clubine was second in B class, while McDonald was third, for the third race in a row.

The Toyo Tires F1600 Championship resumes August 15/16 as the Series travels to Shannonville Motorsport Park for the SMP Summer Challenge Races. For the most up-to-date information as the event approaches, please visit formula1600.com and follow the Series on Facebook and Twitter.