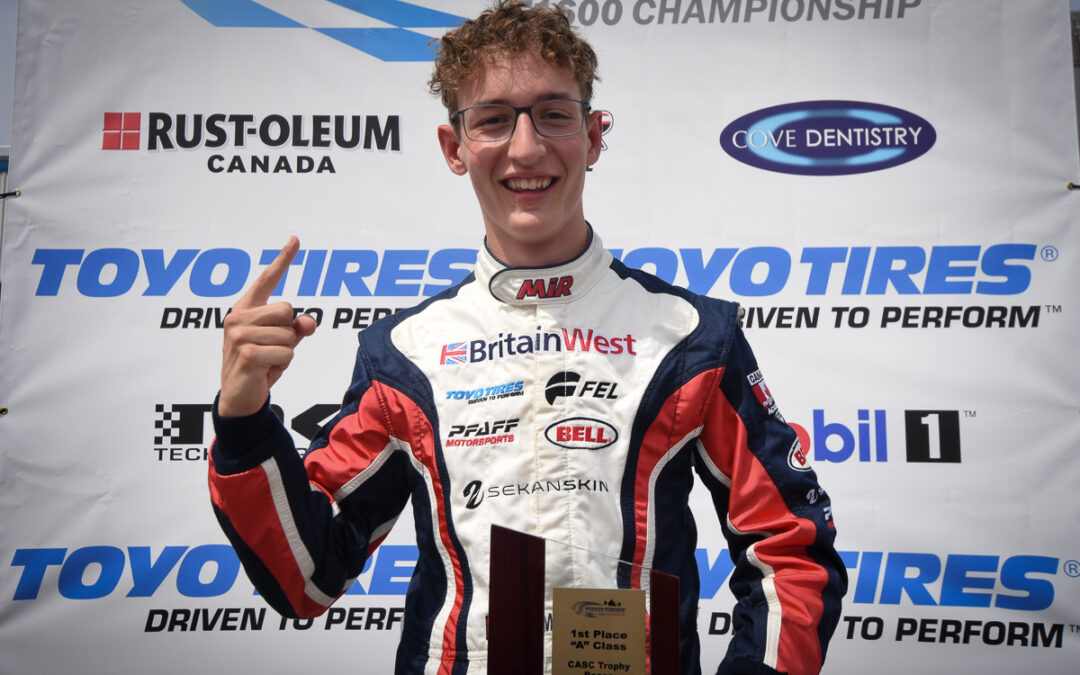 The Toyo Tires F1600 Championship began its altered 2020 campaign over the weekend as teams and drivers converged on the freshly paved Canadian Tire Motorsport Park for the Canadian Automobile Sport Clubs – Ontario Region Trophy Races. Seventeen drivers were on hand for the first of six tripleheader events, and a pair proved to be as hot as the scorching weather. Mac Clark swept the weekend in A class, while James Lindsay did the same in B class.

After an optional practice day Friday and an official practice run Saturday morning, Megan Gilkes (Brian Graham Racing/Piper) and Clark (Britain West Motorsport/Mygale) had a terrific scrap for pole position in qualifying. Clark took the spot after the first flying lap, only to have Gilkes lower it on the next. The time of the BGR driver then held to lap seven, when Clark posted a 1:30-flat in regaining top spot. Two laps later though, Gilkes put down the pole position lap as the only driver to go under 1:30 when she produced a 1:29.955. Following in the top five at the end of the session were: Clark, Jonathan Woolridge (Brian Graham Racing/Piper), Jack Polito (Brian Graham Racing/Piper) and Dean Baker (Baker Racing/Spectrum). Lindsay (Britain West Motorsport/Van Diemen) completed row three as the fastest B class car.

F1600 drivers were then last on track to close the first day of regional racing and the jump to get going got the better of some as the first start was waved off. The resulting accordion effect caught a few drivers out, as both Bill Tebbutt (Tebbutt Racing Enterprises/Van Diemen) and Jim Hallman (Britain West Motorsport/Mygale) were forced to retire after contact. The second attempt to start was successful, and Clark grabbed the lead from Gilkes working toward turn two with Woolridge slotting third. The lead duo then slipped off the front after that, with Gilkes constantly harassing for the lead. She got it on lap eight coming up the back straight, but just one lap later Clark replied in turn and was back at the head of the line with a lead he would never surrender. Gilkes continued to push as the laps wound down, but after a wide run in one, Clark had an open road to victory – his first in the Toyo Tires F1600 Championship Series.

Woolridge ran the race distance to a hassle-free podium result in third, while Dean Baker was fourth. Baker initially had a comfortable gap to cruise in, but as the laps ticked by he was run down by a group consisting of Lindsay, Polito, Graham Lobban (Jaftrman’s Garage/Van Diemen), Sam Baker (Baker Racing/Spectrum) and Keith Lobban (Deep Thought/Van Diemen). The pack of six produced some terrific racing in the back half of the race. Polito dropped to the tail of the group after a move looking inside Lindsay in turn nine didn’t come off, and for the rest of the way after that Baker fought successfully to keep B class winner Lindsay behind. Andrew Mason (Mason Racing/Van Diemen) followed the group to secure second in B class, while Kieran Murphy (BWM/KMM/Van Diemen) was third and had the most positions gained in the race.

With the fastest lap in Race 1, Gilkes confirmed pole position for Race 2 Sunday morning with Clark once again alongside. The second race was very similar to the first, albeit with even more action at the front! Clark once again took the lead on the first race lap and held for three before Gilkes went by and held for the next three. The pair then exchanged the top spot on laps seven, eight, nine and ten, always within a half-second of each other at the line and well clear of the field. Gilkes carried top spot into the final third of the race, setting her best laps on eleven and thirteen as she looked to wriggle free, but Clark unleashed the fastest lap of the race on the final tour to produce the winning margin and make it back-to-back wins to start the season!

BGR teammates Woolridge and Polito had a great scrap for the final podium position through twelve laps before Polito fell down the order. Woolridge then ran to an isolated third, ahead of the same group of cars that raced in a tight group during the first start. On this day, Sam Baker was best of the rest, followed by dad Dean B, class winner Lindsay and the Lobban brothers, Keith and Graham. Mason was next in crossing second in B class once again, with Connor Clubine scoring his first class podium in third.

The last-lap best-lap in Race 2 by Clark put him on pole for Race 3, the final start of the weekend, and the field was in no hurry to set the order in this one. Up the back straight and into turn eight, groups were still two and three wide before turn nine finally produced single file. Clark led from Gilkes, Woolridge and Polito in the first four-pack of cars with a second following where Keith Lobban led Sam Baker, Dean Baker and Lindsay. The lead pair were side by side once again the next time up the straight with Gilkes emerging on the point the second time around. One lap after that Polito dropped from the pack after an excursion at Moss Corner, and the top three spread with Clark back leading from Gilkes and Woolridge. Gilkes then spent the next six laps running down the leader and completed the task on lap ten when she returned to the head of the line. She and Clark were by then nearly eight seconds clear of third, and remained nose-to-tail headed to a final lap showdown. Once again in Race 3, Clark sealed the deal with a last-lap pass to complete an impressive hat trick of wins on opening weekend.

Woolridge started his sophomore campaign with his third consecutive podium, while the rest of the top ten was never quite as clear. Sam Baker and Keith Lobban initially had a gap on Lindsay, Dean Baker and Graham Lobban, but their familiar pack had reformed headed into the back half of the race. Positions changed multiple times before the checkered flag waved, with Sam Baker once again taking fourth, this time holding off Lindsay, Dean Baker and Keith Lobban. Fifth overall gave Lindsay a weekend sweep in B class, while he was joined on the podium for the second time Sunday by Mason and Clubine.

The Toyo Tires F1600 Championship returns to Canadian Tire Motorsport Park July 25-26 for the BARC Canadian Touring Trophy Races. For the most up-to-date information as the event approaches, please visit formula1600.com and follow the Series on Facebook and Twitter.