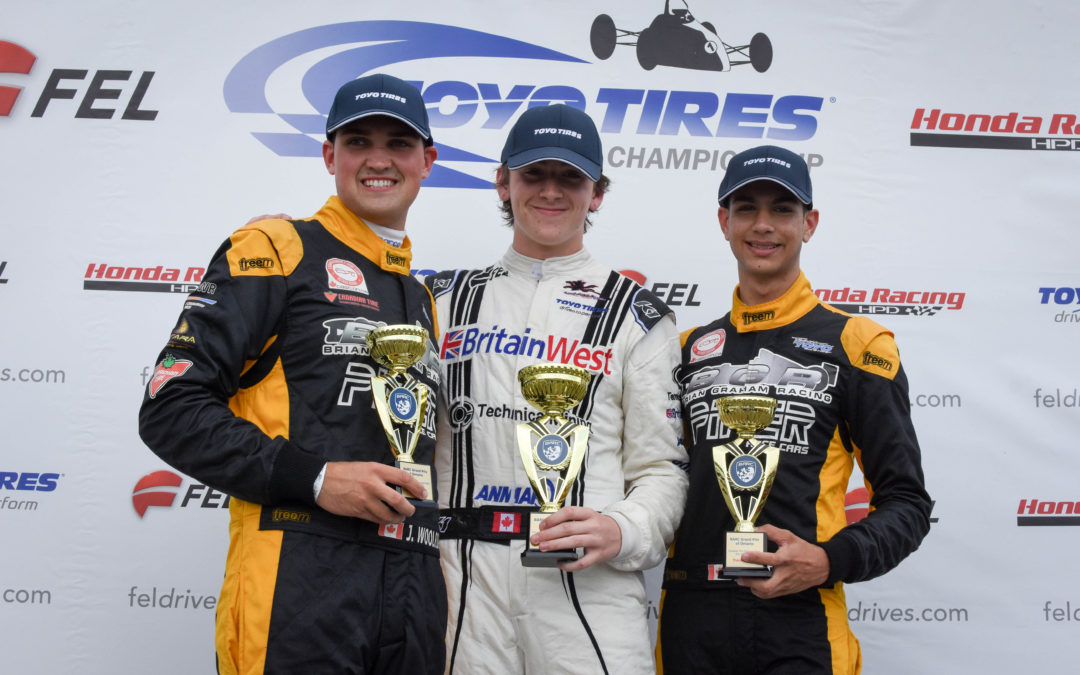 The 2019 Toyo Tires F1600 Championship raced its penultimate round over the weekend with the series hitting Canadian Tire Motorsports Park for the third time this season. The British Automobile Racing Club Canadian Touring Trophy Races were on the docket, with F1600 competitors also vying for the Al Craighead Memorial CanAm Cup in the first start of a weekend tripleheader. Zachary Vanier swept the event in A class while James Lindsay scored two dry wins in B class, before Steve Bodrug won the finale.

A field of 24 was on hand but perhaps more notable was a car that wasn’t – that of championship leader Olivier Bedard. As the only conflicting date with the Quebec-based F1600 Championship, Bedard was at Mont-Tremblant for its Summer Classic event. Zachary Vanier (Britain West Motorsport/Mygale) took full advantage in the absence of his main adversary, clocking a time of 1:28.875 to take pole position Saturday just before lunch. James Lindsay (Van Diemen) was fastest in B class and second overall, followed in the fast five by Matthew Barry (Brian Graham Racing/Piper), David Taylor (Vallis Motor Sport/Van Diemen) and Matt Gidman (Britain West Motorsport/Mygale). After Vanier’s quick pole lap, the next five drivers all clocked within a second – a sure sign of tight racing to come.

When the green flag waved Saturday afternoon for Race 1 Vanier checked out in a hurry. Already one second up after the first flyer, the teenager from Garson, Ontario, averaged another second per lap through a twelve-lap race to win by nearly thirteen seconds. The racing behind was much more intense, and consistently saw five cars minimum crossing within a second of each other. Taylor held second spot through the first three laps but Jonathan Woolridge (Brian Graham Racing/Piper) was on a charge. After being second fastest in morning practice, he couldn’t find the same pace in qualifying and lined up P7 for the the first race of the weekend. The rookie then moved to sixth during the first lap and after setting the fastest lap in the field on two he was up another spot to fifth. Woolridge was then third through three, and in second spot through four laps as he began a great race for the podium with Taylor and Lindsay. Also crossing within a second as the race hit its halfway point were BGR teammates Mac Clark and Matthew Barry. In the second half Lindsay shuffled back to secure a B class win while Taylor and Woolridge swapped podium spots three more times before a red flag ended the race early. Running seventh, eighth and ninth respectively, Barry, Graham Lobban and Sam Baker tangled going into Moss Corner and contact saw Lobban flipped over! He escaped unscathed, but the race had then been run. Vanier claimed the Al Craighead Memorial CanAm Cup with a win from Taylor and Woolridge, while in B class Lindsay held off Steve Bodrug (Speedpro/Van Diemen) with Bill Tebbutt (TRE/Van Diemen) third.

After a great set of closing laps that saw him charge from eighth to fourth, Connor Wagland (Burloak/Piper) nearly secured pole for Sunday morning with a lap of 1:30.143 seconds, but Vanier pipped it on the final lap of the race with a 1:30.055 of his own. The pair then created the front row for Race 2, where Vanier once again raced clear of the field as an epic battle waged behind him. Woolridge held second through the first three laps, but Wagland got the spot back on lap four with Barry moving into third as well. Wagland and Barry then swapped second spot at the line for seven consecutive laps! Just behind, Woolridge was swapping fourth with Lindsay, with both very much in touch for the podium. Showing great pace for the second day in a row, Woolridge set the fastest lap in the field during race two, and as he completed lap twelve he was back in P2. Then the exchanges began between the BGR teammates every lap to the final flag! In the end, while Vanier was seven seconds clear for the win, Barry took the second step by the slimmest of margins – 0.086 from Woolridge. Wagland was just off the podium in fourth for the second day in a row while Lindsay was fifth overall in taking his fifth-straight B class win. Bodrug repeated in second in B class, with Tebbutt once again third, just edging Mike Dodd through fifteen laps. The race ran caution free and in dry weather Sunday morning, but all that was about to change.

At the start of Race 3, Byron Leis (SPH/Van Diemen) had issues getting away and Kieran Murphy (KMM/Van Diemen) spun and tagged the wall in taking evasive action on the front straight. A full course caution for clean up followed, but while the field circulated behind the safety car the skies opened leading to a red flag race stoppage due to track flooding! After the delay, Woolridge led the field from pole when cars returned to the track behind the safety car, with Vanier second, Barry third, Taylor fourth and Wagland fifth. The green waved once again to begin lap six in what would prove a five-lap dash. Vanier got back to the point on the first racing lap, then proceeded to lower the fastest lap of the race on four consecutive laps with conditions improving. His margin of victory in the final start was over ten seconds! Maintaining the runner-up spot, Woolridge was not going to be denied the second step in the final start and scored his best career finish and third consecutive podium. Barry also repeated a podium performance, running the distance in third. It all may have changed had there been one more lap though, as Bodrug was on a charge in winning B class and crossing fourth overall. He was P10 when racing resumed, sixth two laps later and fourth at the final flag having just set the fastest lap in the entire field by nearly seven tenths-of-a-second! Lindsay was next up in B class with Tebbutt also scoring a third-consecutive podium result.

The final round of the championship will be in front of a packed house next month as NASCAR Trucks return to Canadian Tire Motorsport Park for the Chevrolet Silverado 250. With his sweep of the weekend at Round 5, Vanier takes over the championship lead with 361 points to Bedard’s 348. Barry is next and leading the rookie class at 224, followed by BGR mates Clark at 189 and Woolridge at 188. Lindsay remains in firm control of the B class title chase with 385 points, followed by Mike Lee at 262, Bodrug at 175 and Tebbutt at 104. Drivers are able to drop two race finishes from individual tallies before final calculations are completed.