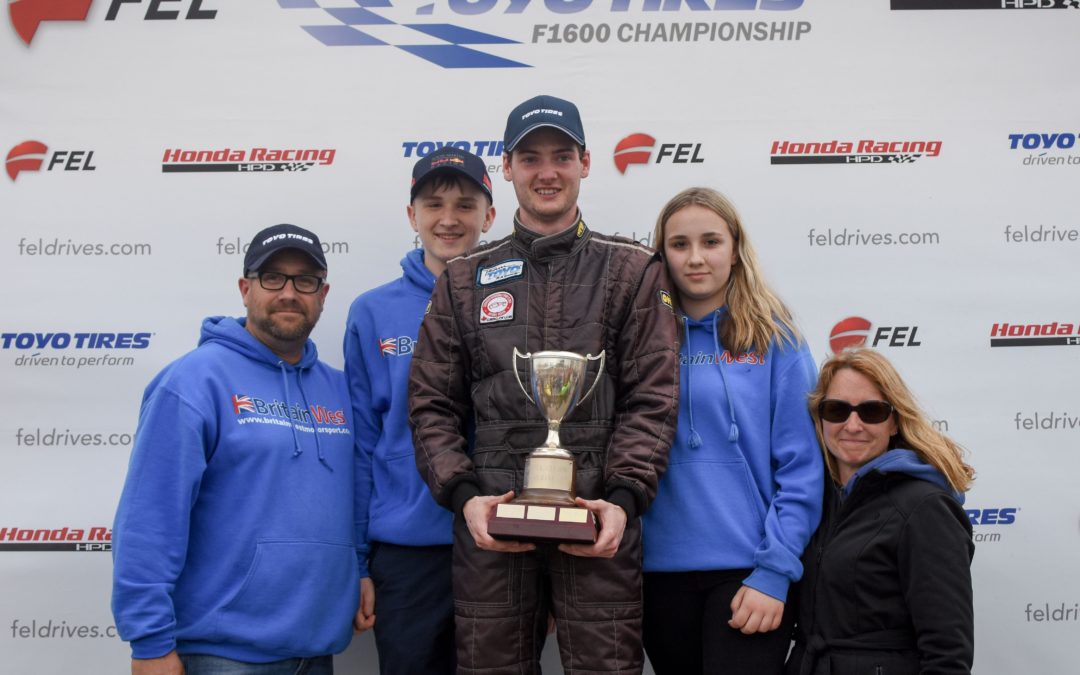 The 2019 Toyo Tires F1600 Championship reached its halfway point last weekend as the series returned to Canadian Tire Motorsport Park for the Vintage Automobile Racing Association of Canada Grand Prix weekend. Once again making three starts, the championship has now completed nine of eighteen races with Olivier Bedard in firm control of the A class championship and James Lindsay in control of B class.

A massive field of 30 was on hand to create fifteen rows in Saturday morning qualifying where Bedard (Exclusive Autosport/Spectrum) once again put his car on pole. This time out his lap of 1:30.272 was just under two-tenths clear of the field. Matthew Barry (Brian Graham Racing/Piper) earned a front row start, just as he did in race two earlier this season, with veteran Craig Willis (AIM Autosport/Aero2) in third as the highest qualifying B class car. The fast five was rounded out by Zachary Vanier (Britain West Motorsport/Mygale) and Mac Clark (Brian Graham Racing/Piper). Once again, the top five qualifiers were covered by less than one second.

For the fourth consecutive race the field ran full race distance without a caution period, and for the seventh straight race in the series Bedard was clear and in control. He escaped early in this one as drivers behind fought for position and was already five seconds up the road after four laps and nearly eight clear when the race hit half distance. Behind him, Barry first diced for second with teammate Clark before Vanier came calling on lap five and got the spot. Showing the incredible level of competition, it wasn’t until lap seven and half distance that the top five completed back-to-back laps in the same order: Bedard leading Vanier, Willis, Barry and Clark, with each driver setting their fastest lap of the race to that point.  Jonathan Woolridge (Brian Graham Racing/Piper) set the fastest lap of the field running sixth, and returning past champion Shane Jantzi (Van Diemen) set his best as cars and tires were hitting peak performance.

Willis then set the fastest lap in the field on eight as he moved into second after having fallen in the field early, only to have Bedard reduce the best lap on nine and make it clear he had no intention of having his margin nibbled. The leader would not be challenged, while second through seventh was covered by less than a second. Three defining events established the podium order in the final stages. First, mechanical issues slowed Willis, causing him to fall down the order, and a lap later Woolridge spun out of third. Jantzi then got a fantastic run on the remaining BGR cars up the back straight and took both going into turn eight as they ran three wide! The podium was then set: Bedard, Vanier and Jantzi. David Taylor (Vallis Motor Sport/Van Diemen) worked his way to fourth in the closing laps, with Clark crossing in fifth. Third through seventh crossed the line in just over a second, with Willis leading the way in B class, P6 overall. Lindsay was second in class, with Steve Bodrug third. The class win for Willis was extra-special as he earned the Oliver Clubine Trophy, annually presented in the first F1600 run of the VARAC Vintage Grand Prix Weekend.

Race two Sunday morning was a much different affair as there was pandemonium completing lap one! The car of Dean Baker (Baker Racing/Spectrum) slowed coming out of turn ten and Steve Bodrug (Van Diemen) spun in taking evasive action to avoid heavy contact. The field behind was then scurrying to do the same with Alex Trubey (Exclusive Autosport/Spectrum) being collected in the fray. Bodrug and Trubey retired, while the remainder of the field completed the following five laps behind the safety car. Bedard had held from pole position after the fastest race lap on Saturday while Barry was second ahead of Willis, Vanier and Clark when action resumed. The green flag waved again for lap seven and Bedard made it clear he was checking out. He lowered the fastest lap of the race over three consecutive laps to create a margin of nearly three seconds, and it stayed there for the rest of the run. Vanier got third on the first green lap back and took second two laps later in securing the second step of the podium once again. Barry was just under a second back in third, the same gap he held on Willis in fourth overall and first in B class. James Lindsay (Van Diemen) was second in B class, strengthening his lead in the overall championship, while Michael Adams (Flagship Racing Services/Lola) was third.

Race three Sunday afternoon was the feature race of the VARAC Vintage Grand Prix weekend as drivers and special guests celebrated 50 years of Formula Ford racing in North America. Attendees included Brian Stewart, Stu Lamont, Danny Burritt, Clive Rahman, Don Sobering and John Scratch, among others. The start was anything but celebratory though, as cars stacked up anticipating the green and Sam Baker (Baker Racing/Spectrum) had contact that left him stranded on the main straight. Contact from behind in turn one also sent Jantzi into retirement and the red flag was shown leading to a complete restart after a lengthy delay. The second attempt went much more smoothly with Bedard leading the way from Vanier. The pair quickly raced off into the distance en route to another 1-2 finish, leaving a gaggle behind to scrap for the last podium position and the win in B class. Willis and Lindsay swapped the spot multiple times before a gear shift linkage broke in Lindsay’s car and he was forced to retire trackside. Willis duly took third overall and first in B class while the top five was completed by Barry and Connor Wagland (Burloak/Piper). The B class podium was completed by Adams and Mike Lee (Van Diemen).

At the halfway point of the championship Bedard now has a perfect 270 points coming from nine pole positions and nine wins. Vanier is second with 187, with Barry third and leading the rookie class with 124 points. Lindsay stands at 211 defending his B class crown, followed by Lee at 186 and Bodrug at 97. Each driver drops their two lowest point scoring races from individual tallies at the end of the season.