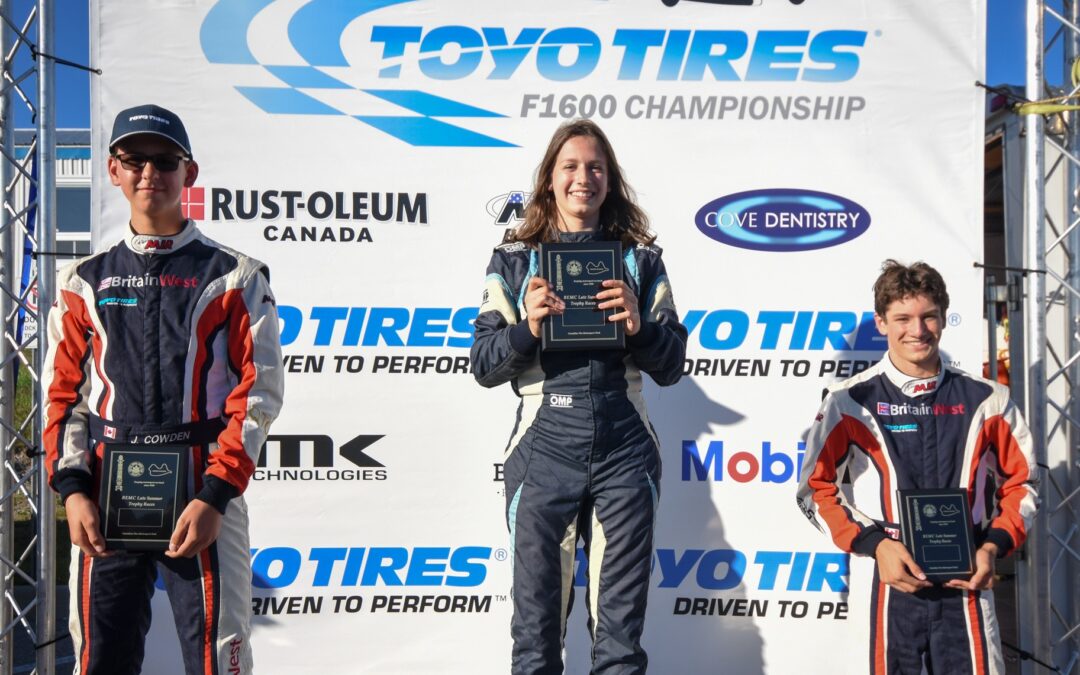 The Toyo Tires F1600 Championship Series enjoyed spectacular weather over the weekend as teams and drivers once again converged on Canadian Tire Motorsport Park for the penultimate round of the 2021 Championship. The British Empire Motor Club Late Summer Trophy Races were on the docket, and a field of 23 cars was on hand for a customary tripleheader. It was all Gilkes on the top of the podium in A class, as Nick won the first two starts before visiting sister Megan won the Sunday finale. In B class Connor Clubine produced another clean sweep, this one starting from the back of the pack and working forward through the weekend.

The story of Saturday morning practice was returning driver Megan Gilkes, as she laid down the fastest F1600 lap of the season at 1:28.581 in just her fifth trip around the rolling hills. Younger brother Nick and Britain West Motorsports’ stablemate Jake Cowden were also in the 1:28 bracket, with title hopeful Sam Baker fourth and Jack Polito fifth. Then, in qualifying proper just before lunchtime, Nick pipped the time at 1:28.533 on his fifth lap, and it held for the duration! Baker and Polito were chasing the time early, before Cowden produced a front row effort at 1:28.8 in the second half of the session and Megan Gilkes also went under 1:29 to qualify in P3. Baker and Polito were fourth and fifth once again, with Jonathan Woolridge joining his Brian Graham Racing teammate on row three. Dean Baker and Connor Wagland were next after a penalty flipped the pair, with James Lindsay and David Taylor completing a top ten that was completely A class cars. Andrew Mason was the fastest B class car in P13, with point leader Clubine forced to start the weekend from the back of the pack after radiator problems.

Race 1 late in the afternoon proved to be not much of one at all, as after a little more than three laps the rest of the run was spent in single file behind the safety car. The green flag briefly waved on lap ten, but just seconds later the yellows were back out after a driver at the back of the back was caught out by the accordion effect and checkers sent the drivers to the paddock the next time around. Gilkes and Cowden had held 1-2 from the front row and stayed that way from start to finish. Sam Baker and Woolridge got by Megan Gilkes working lap two, then Woolridge got to podium position on three after setting the fastest lap of the race. The BritWest pair were a second clear by then, though, and just over a lap later the yellow flags were waving. Nothing could change in the top five the rest of the way, so Nick Gilkes won from Cowden, Woolridge, Baker and Megan Gilkes.

Polito was running sixth from the start ahead of Wagland, Dean Baker and Lindsay, but he looped it in turn three on lap three and collected Baker in the process, ending Baker’s weekend on the spot with significant damage. In B class, Clubine was immediately on a charge starting from the back. He was P18 after the first lap, and P16 after two. He got four more cars on lap three, and inherited P11 before the yellow flags halted his charge. By then he had the job done though, as three of those moves took him from best-of-the-rest to P1 in class! Dylan McPherson was next on track and second in class, with Mason following and rounding out the B class podium.

The fast lap that put Woolridge on the podium in the first start earned him pole position for Race 2 while Cowden lined up off pole for the second straight race. Nick Gilkes and Sam Baker were on row two, with Polito and Megan Gilkes on row three. Woolridge held the point for the first racing lap, but Nick Gilkes took it on lap two and checked out after that. He set the fastest lap in the field on both two and three as he stretched the lead to over a second, and he was up by 2.5 seconds when he set the fastest lap of the race on six. Gilkes extended the lead every single lap and was eight seconds clear of the field when he confirmed his fourth win of the season.

The battle for second was much more intense, and through the opening laps Woolridge, Sam Baker and Cowden each held the spot. The exchange continued through the middle stages when Megan Gilkes also entered the fray, and on lap nine the quartet were covered by one second at the line. Baker and Woolridge then swapped the spot on laps eleven, twelve and thirteen, before Woolridge managed to hold it for consecutive trips. That earned him the second step of the podium, as Jonathan Brooks had a gearbox issue in turn five shortly after that led to a spin. He collected Mason in the process, and for the second straight race the yellow and checkered waved together – Gilkes was fourth, Cowden fifth and Polito sixth. Wagland and Lindsay were in close quarters once again, swapping positions numerous times before Lindsay got the upper hand for the second race of the weekend, and Clubine was next and the race Hard Charger as he took B class ahead of McPherson and Mike Lee.

Race 3 had an all-Gilkes front row with Nick on pole from Megan by less than a tenth, and the pair looked determined to maintain the positions through the first half of the race. Nick led laps one to nine, but big sister kept the gap static before taking over the lead on ten. That set off a sibling rivalry that brought Cowden back into the fray after the rookie had set the fastest lap of the race on nine and bettered it again the next time around. The trio was over five seconds clear at this point, and all was set for a five-lap showdown. Nick took the point back on eleven with his best lap of the race, only to have Megan set her best on twelve and get by once again. She then extended the lead as Cowden took over second position on thirteen, and held through the final three laps to score her first Toyo Tires F1600 win! Cowden kept the door closed over the same three laps to record his seventh podium result of the season, while Nick Gilkes settled for third and further extended his championship lead heading to the final weekend of the season.

Behind the lead trio, Woolridge and Baker were swapping positions just as they did in the prior start. From lap five to fourteen, they actually traded fourth every time across the line! Woolridge then held the spot consecutively and under the Last Lap Board, but Baker got by on the final lap of the weekend to secure fourth by the slimmest of margins. Clubine was just behind the pair in securing sixth overall and a B class win once again, while Lindsay was seventh again, this time emerging from a great race-long squabble with Graham Lobban. Lee earned his second B class podium result of the weekend in P12 overall, while right behind on track McPherson produced his third.

The Toyo Tires F1600 Championship concludes October 2-3 at Canadian Tire Motorsport Park with the CASC Celebration of Motorsports. For the most up-to-date information as the event approaches, please visit formula1600.com and follow the Series on Facebook and Twitter.