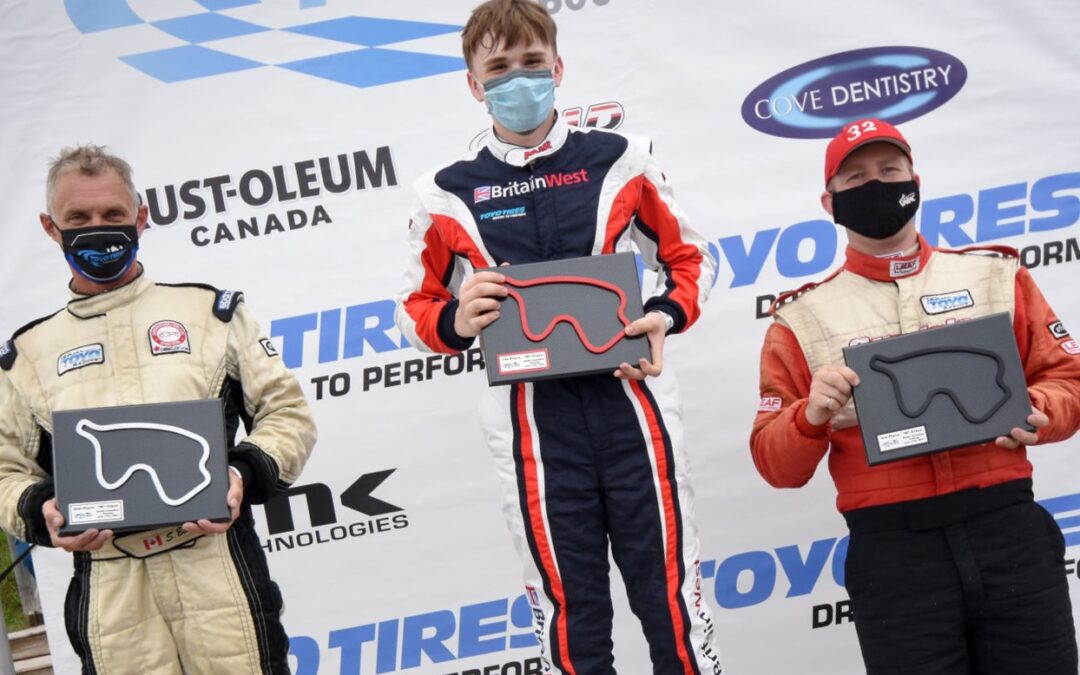 The Toyo Tires F1600 Championship Series resumed last weekend at Canadian Tire Motorsport Park and while the British were enjoying beautiful sunshine and balmy weather at Silverstone, there was no such luck for teams and drivers at the British Automobile Racing Club’s Canadian Touring Trophy Races. Persistent rain put a damper on day one, and a field of 24 was forced to come to grips with tricky track conditions throughout. A sunny Sunday was then welcomed with open arms, and when all was said and done Sam Baker picked up a pair of A class wins after Nick Gilkes won the opener, and Connor Clubine three-peated for the second straight event in B class.

Qualifying rolled off just before 2pm Saturday and through the first half of a 15-minute session, Jake Cowden sat on top ahead of Gilkes, his Britain West Motorsport teammate. The Baker Racing tandem of Sam and Dean Baker came next, with Connor Wagland sitting fifth. Drivers then began to find time in the back half of the session, but nothing changed at the top until Gilkes produced a 1:48-flat just past the eleven minute mark. Clubine then jumped to P5 overall as the fastest B class car, and just before the checkered flag went up to end the session, championship leader Sam Baker produced a pole lap at 1:47.5! Gilkes was still working a lap though, and as he completed his final tour the rookie snatched pole position back by going a full second clear of the field! Baker cut into the margin with a quick last lap of his own, but Gilkes remained on top with his second consecutive pole. Baker joined him on the front row, Cowden was third, Dean Baker fourth and Clubine fifth.

The rain had finally subsided by the time Race 1 took to the track to end action on day one and Gilkes made good at the start to lead the field away. Action was then slowed by a full course caution before the lap was out, as James Lindsay went around at Moss Corner and collected Jonathan Woolridge and Graham Lobban in the process. Cars then spent six laps and seventeen minutes under caution, before the green flag waved on a four-lap shootout. That’s when Gilkes thoroughly stamped his name on the race. The rookie led all four laps and lowered the fastest lap each time across the line to win by over two seconds. After finishing 2-3-2 at the opening round, the teenager from Richmond Hill was headed to the top of the blocks in his fourth series start! Sam Baker was second, as he also had a trouble-free four-lap run and maintained a season-long podium streak in his own right.

The battle for the final step was much more intense as Jack Polito and Dean Baker swapped the spot continuously lap after lap. In the end, it was Baker who claimed it, crossing just a nose in front. Wagland went green-to-checker in fifth, while Clubine crossed sixth overall and tops in B class after emerging from a dice with Steve Bodrug, who was seventh overall and second in B class. Brent McPhail was next, while Andrew Mason completed the B class podium in ninth overall. Mike Dodd wrapped the top ten after setting his fastest lap of the race on the final tour to finish seven spots better than where he started.

Sunday morning brought a much needed reprieve as Mother Nature delivered sunny skies and dry track for Race 2. Gilkes was on pole position once again with Sam Baker alongside, and the pair quickly checked out on the field in a fifteen-lap affair that was green from start to finish. Both led at stages early on, and after multiple side-by-side trips into turn eight they were rarely more than a tenth apart at the line throughout. In the end the race belonged to Baker, as he coolly maintained the lead and was error-free on the way to his third win of the season. Gilkes was next of course, continuing the streak of each standing on the podium following every race of the season.

Wagland and Cowden had a similar situation racing for third once things settled in, and while Wagland owned the spot running most of the laps to nine, Cowden got by on ten and wriggled free afterwards to claim the final podium position, the second of the year for the rookie driver. Clubine led the B class home after spending a majority of the race isolated and crossing after Wagland for the second straight day. Woolridge was next in sixth overall after producing the Hard Charge of the race. Starting from P24 and last after being collected in Race 1, the Brian Graham Racing driver was already into the top ten after four laps and had reached P6 by lap eight! He set the fourth fastest lap in the field late during the charge, meaning he would be even farther up the grid for the start of Race 3. Lindsay also had a charge from the back, fifteen spots better than where he started as he crossed seventh, followed by Dean Baker in eighth and matched in positions gained by Graham Lobban in ninth. Joining Clubine on the B class podium were Mason and rookie Dylan McPherson.

With a dry race run establishing the qualifying times for Race 3, onlookers expected the action to much more resemble that of Round 1 where massive multi-car trains fought for the wins and podium positions. When the green flag went up on the last session of the weekend – the Toyo Tires F1600 drivers did not disappoint! Woolridge, Gilkes and Sam Baker each led at times, and when the race hit the halfway point there were six cars within one second of each other at the front. The lead trio was swapping the top spot lap after lap, while Polito, Cowden and Lindsay were also in the train. Then, working lap thirteen of fifteen, Gilkes was looking for a run around the outside in turn three and washed wide! A trip across the grass meant he fell down the order, and that left just a pair looking to settle it.

Woolridge led at the end of thirteen but working fourteen Baker got by at the end of the Mario Andretti Straightway and held the lead under the Last Lap board. Then, just as he did in the morning run, he made good on the final lap to deliver a victory – his fourth on the season. Woolridge was right on his tail in second, and in much more familiar territory with the podium result. Polito scored his first podium finish of the season in third, followed by Cowden, Wagland, Lindsay and Gilkes. Clubine crossed in eighth overall as the lead B class driver once again, joined for a second time on the podium by Mason and Bodrug, the Hard Charger of the race.

Recognized in the Cove Dentistry Master Class at round two were Kari Salo, for making up seven positions during the race that wrapped a very long Saturday; Brent McPhail, for producing three Top-10 runs over the course of the weekend; and Sean Johnston, after he turned his fastest lap of the season in Race 3 and produced three consecutive top-six class results.

The Toyo Tires F1600 Championship Series resumes August 21/22 at Calabogie Motorsports Park with the Calabogie Summer Classic. For the most up-to-date information as the event approaches, please visit formula1600.com and follow the Series on Facebook and Twitter.