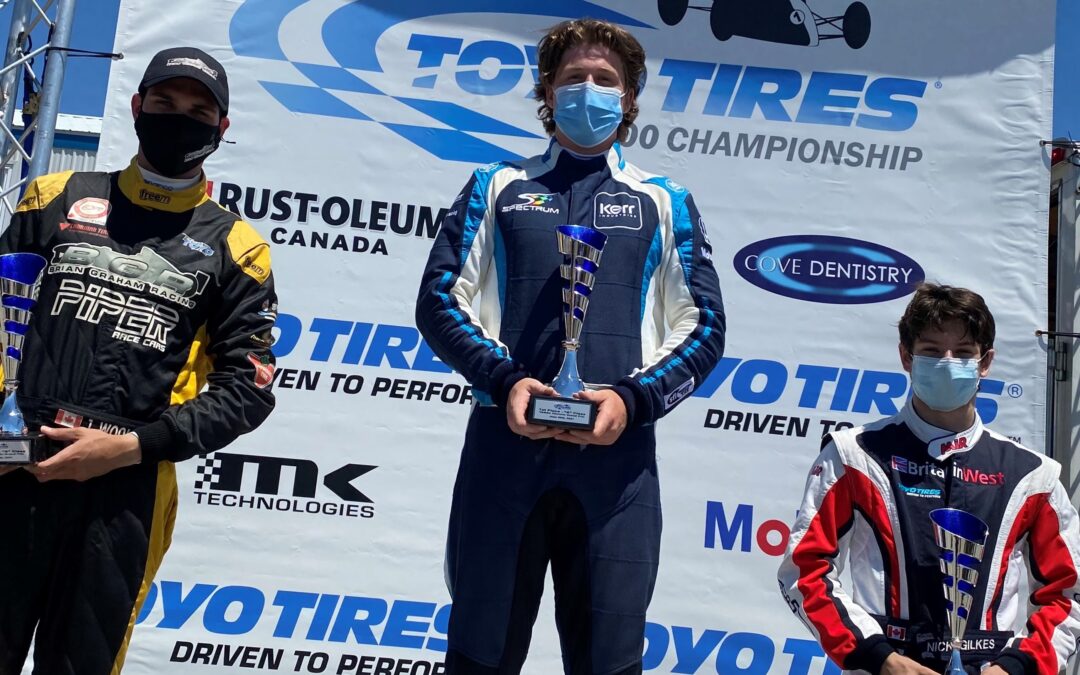 The Toyo Tires F1600 Championship Series kicked off its 2021 campaign over the weekend as Canada’s premier open-wheel racing contingent was at Canadian Tire Motorsport Park for the Vintage Automobile Racing Association of Canada Vintage Grand Prix. After a soggy practice day Friday, beautiful skies and balmy weather signalled the return to racing, and 27 cars contested the first tripleheader event of the season. In races that ended under yellow, green and red flag conditions, Sam Baker produced a pair of wins while Jonathan Woolridge took the other in A class and Connor Clubine swept the weekend in B class.

Qualifying on Saturday morning offered drivers their first chance at hot laps in the heat, and through the opening five minutes Connor Wagland was quickest on the time sheets. Rookies Jake Cowden and Nick Gilkes were next, followed by Dean Baker and the quickest B class car of Clubine. Sam Baker and Woolridge then moved into the top five working to the halfway mark of the session, before drivers started dropping the clock in the second half. Woolridge moved first and went P2 just before Gilkes went to pole on his seventh lap. Wagland then popped to P3 before Gilkes lowered his pole time and James Lindsay posted P3 himself. The front row was confirmed on the final tour as Gilkes produced a lap of 1:30.317 to take pole in his series’ debut, just as his sister Megan did one year earlier. Wagland joined him on the front row on his final lap, followed in the top five by Cowden, Lindsay and Woolridge.

The pole lap of Gilkes was very nearly a second clear of the field, but there was definitely no clear advantage for a driver in Race 1 Saturday afternoon, hinting at a trend that would follow through the weekend. The race was into its second half before a car led consecutive laps with Gilkes, Wagland and Woolridge each leading at stages among a five-car pack that also included Dean and Sam Baker. Lap seven was the first time a car repeated in leading across the line, and it was Gilkes who did so after gaining a 1.3 second advantage over Woolridge. The winner looked to be coming from the pair by that point, and the remaining laps played it out with the veteran getting the better of the rookie on the day. Woolridge set his fastest lap of the race on eight to cut the lead to an even second, then set the fastest lap in the field on nine to get to the back of Gilkes. He moved into the lead on ten when he bettered the best lap again, and held through eleven when the track went full course caution due to an accident on track. One lap later the checkers were up and Woolridge had his first career win, Gilkes a podium result in his first career start and Sam Baker a first career podium as well. Dean Baker was next in fourth ahead of Wagland in fifth.

The back half of the top ten was also hotly contested as Lindsay, Jack Polito and Clubine were in the mix. Lindsay led the trio once things settled in, but Polito set his best lap when he went to the head of the line working lap six. The pair then swapped the spot over the next two laps before Polito established himself on top for the duration. Clubine came next, winning the B class and the Oliver Clubine Cup named after his grandfather and contested annually in the first race of the VARAC Vintage GP weekend. Lindsay followed in eighth overall, ahead of Keith and Graham Lobban, the brothers running nearly the entire race distance in ninth and tenth. Steve Bodrug was next, second in B class and the Hard Charger of the race after making up seven spots altogether, with Andrew Mason following him in and completing the B class podium.

Setting the fastest lap in the opener gave Woolridge pole position for Race 2 Sunday morning but it was Dean Baker that got the best of the rest on the first flying lap as he gained four positions to lead Woolridge, Gilkes, Polito and son Sam across the line. The joy was short lived though, as contact at the top of turn two on the next lap dropped him down the order before additional contact later in the lap led to a pit stop as the yellow flags waved. The field remained under full course caution through the end of lap five with Gilkes at the head of the line, and when racing resumed Woolridge was quickly back to where he began the day, leading an incredibly tight pack of F1600 race cars. The man on the move through the middle stages of the race was Sam Baker. Third after racing resumed, he was then second through seven laps and in the lead through eight when one second covered the top four cars. A lap later one second covered the top six cars, and when the field completed lap ten one second covered seven cars with Baker still leading, now from Cowden, Woolridge, Polito, Gilkes, Wagland and B class leader Clubine all racing in line!

The top three remained the same when the Last Lap Board was shown, and Baker made good for his first career win coming one day after his first career podium. Steps two and three changed on the final lap when Cowden was shuffled down the order. Woolridge advanced to P2 for his second podium of the weekend and Gilkes repeated on the podium with third ahead of Polito and Cowden, the top five cars crossing within a second after thirteen laps and demonstrating how tight the competition is set to be this season. Wagland was in the line as well, crossing sixth, and Clubine took the B class for the second straight day in once again crossing seventh. Graham Lobban ran most of the second stint in eighth after the restart, Bodrug did much the same in ninth to take the second step in B class and Mike Lee completed the class podium after crossing P12 overall.

Race 3 went off Sunday afternoon and proved to be the most hotly contested in recent memory! Only twice during the race were the podium positions the same completing a lap, and the top five never crossed in the same order from start to finish! When the Last Lap Board was shown, the first eight cars crossed in just over eight-tenths of a second – and the race still wasn’t settled when the action was halted early! Polito had started from pole and was one of four drivers to lead laps in the opening stages with Woolridge, Cowden and Sam Baker being the others. Wagland, Gilkes and Dean Baker were also in the lead group as it ebbed and flowed, and as the race entered its second half Sam Baker and Woolridge were exchanging the lead while Cowden was the man on the move. The rookie was P6 before gaining a spot on three consecutive laps and moving into third, and two laps later he had only Baker in front of him with Woolridge, Polito, Gilkes and Wagland directly behind. The action was intense!

Baker maintained the lead from Gilkes one lap later, a fact that would be key in retrospect. When the Last Lap Board went up, Polito was second to Baker ahead of Cowden, Woolridge, Gilkes, Lindsay, Wagland and Graham Lobban. The top three were covered by less than a tenth of a second, and the top eight covered by the aforementioned 0.881 as they swarmed across the stripe! Sadly, the grandstand finish was not to be, as after the order shuffled through turn one, contact came in turn three as Baker bounced off the inside curbing and into Woolridge, who then ended in the grass on the outside of the corner. Residual heat from his exhaust led to a grass fire, and that led to an immediate red flag as marshals quickly doused the flames. When scoring reverted to the last fully completed lap, Baker had his second-consecutive win, with rookies Gilkes and Cowden joining him in the top three. Polito and Woolridge were next, followed home by Wagland and the Hard Charger of the race, Lindsay. Clubine was eighth overall in sweeping the weekend in B class, this time joined on the podium by Mike Dodd and rookie Dylan McPherson.

Recognized in the Cove Dentistry Master Class from opening weekend were Bodrug, for his Hard Charging run to second in B class on Saturday; Dean Baker, for setting the fastest Masters lap in all three race runs; and Graham Lobban as he was the highest finishing Masters racer in both Sunday starts.

The Toyo Tires F1600 Championship Series returns to Canadian Tire Motorsport Park July 17/18 for the BARC Canadian Touring Trophy Races. For the most up-to-date information as the event approaches, please visit formula1600.com and follow the Series on Facebook, Instagram and Twitter.