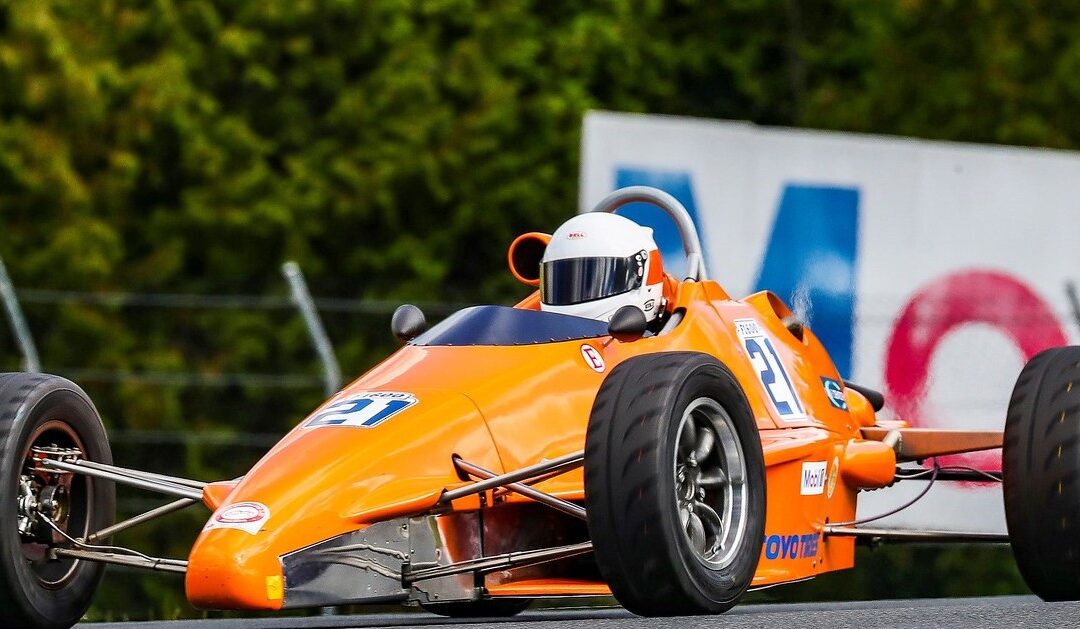 This week’s driver profile isn’t of a new rookie into the Toyo Tires F1600 Championship Series, in fact, he’s truly about as far from a rookie as you can be with over 50 years behind the wheel! Jeff Bateman, of Midland, Ontario, ran his 1984 Citation/Ford in the last two events last season, after first debuting in F1600 back in 1990. He’s a walking encyclopedia on race cars, especially so of those made in our home and native land, and has probably restored and raced more models than series’ youngsters can name. A past president and consistent racer with the Vintage Automobile Racing Association of Canada, he’s raced both open-wheel and sports cars, and is definitely among the drivers that have compiled the most laps around Canadian Tire Motorsport Park in different machinery. He’s also a past winner of the McGregor ‘Spirit of Sportsmanship’ Award in the VARAC Paddock, so he’ll surely be a fine addition to the F1600 paddock as well. Formula1600.com recently caught up with Bateman to get the full story.

We know you have a long and storied history in motorsport. Tell us about it.
I began my motorsport career in 1970 when the CASC inexplicably granted me a racing license at the very last drivers school held at Harewood Acres. Since then I have raced in a number of different classes: Formula F1600; Formula Vee; Formula C; Formula B; Formula Ford 2000; C Sedan; H Production; F Production; E Production; B Sports Racer; C Sports Racer; Sports 2000; Formula Libre; Honda Michelin; and others that I have lost track of! I have been racing vintage cars with VARAC for the past 30+ years. I haven’t raced in a true series since my Honda Michelin days.

What is your # and why did you choose it?
I have had a variety of numbers over the years, all but one of which either added up to, were divisible by, or contained the number seven. I would say that it was my lucky number, but I was just as unsuccessful with the one number that wasn’t any of the above, so what do I know.

What track raced/driven has been your favourite? Why?
I could say that Harewood Acres is a favourite because it was where I started, or Mont Tremblant because I have actually won a couple of races there (this is not something that happens to me very often, so it does kinda stick in the mind), but really CTMP – Mosport for most of my life – is home and always will be as far as racing is concerned.

What is your greatest racing memory, either as a driver or spectator?
One thing that has stuck in my mind over the years is the sound of Chris Amon in the Matra MS120 practising standing starts during early practise for the 1971 Canadian GP. He stopped at the exit of 5b, cranked the V12 up to 11 and let it rip — an ear-splitting wail I never heard before nor since – wow, real F1.

Who is your favourite driver from any generation and why?
I admired all the ‘early guys’ – Eppie Wietzes, John Cordts, Bill Brack, Al Pease, and others, who strapped themselves into ridiculously dangerous racing cars and I got to see really ‘have a go’, as the Brits might say. I remember Ludwig Heimrath tried to sell me his Eisert Indy car: “It’s perfectly safe! Look at it – it’s built like a tank! You’ll do fine!” I was eighteen at the time, I think. Thank God I didn’t have anything like the money to buy it, because I sure as hell didn’t have the brains to say no. Still don’t, if it comes to that.

What are your goals for racing in 2021 and beyond?
My goals for 2021 are to continue to enjoy the great camaraderie in the F1600 paddock and the fun racing on the track. It is a goal of mine to be a regular competitor in 2021, but of course that expression may mean something very different to a senior.