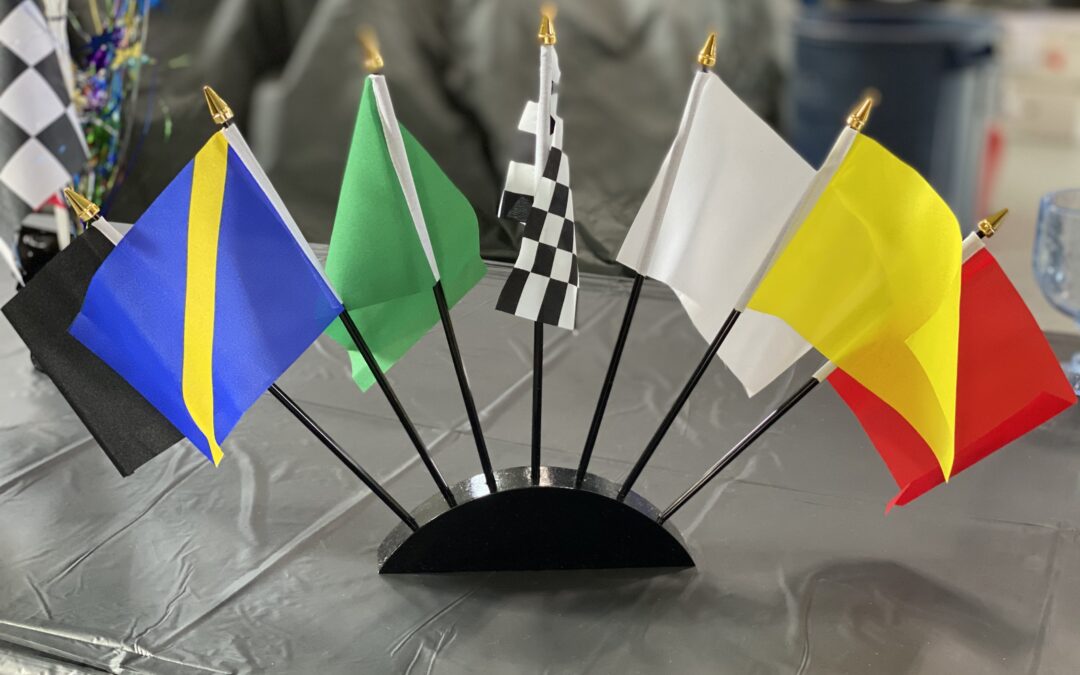 As well as the regular A and B Class Championship awards, special prizes were awarded at the small, intimate socials this past month. Already recognized, Connor Clubine, vice champion in B Class, also earned the B Class Rookie of the Year honours along with MK Technologies Most Improved Award, and A Class Champion, Mac Clark was the Rust-Oleum Most Poles recipient. Now to take note of five more special awards and their winners.

A highlight of the award presentations each year is the Spirit of Gord Lowe Award. A long-time road and motorcycle racer who passed away on New Year’s Day over a decade ago, Lowe had an infectious personality and was a bright light in the paddock for decades. In 2008, his son Aaron designed and created the cherished award and his wife, Karen, declared it be presented, along with one of her photographs, to the driver that best exemplifies the spirit, sportsmanship and passion that was Gord, regardless of car class or point standing.

This year’s recipient is a long-time racer that began in 1977 and has been competing for over four decades! He started with a Lotus 51, moved to a Merlyn, spent time in a famous Ferret and handled both a Swift and Reynard, all in his first two decades! He was a multi-time Champion, and after a sabbatical to raise a family, returned with a Ralt before taking on his current Van Diemen RF82 for Vintage events. He’s also an enthusiastic member of the Toyo Tires F1600 Championship family as a chief mechanic and cheering dad, enjoying both the competitiveness of racing and camaraderie in the paddock – something Gord would certainly understand, celebrate and tip his hat to. Previous recipient, Mike Lee, was on hand to present this year’s award to the very deserving, Steve Wagland.

Rookie drivers arrive in the Toyo Tires F1600 Championship Series from a number of different avenues but it’s rare indeed for a snowcross champion to join the paddock. Such was the case in 2020 when Pro-Lite National Champion Jack Polito signed on with Brian Graham Racing for a summer season. After finding his way through the first tripleheader race weekend, he very nearly won in his fourth career start in what was without a doubt the wildest race of the season! He was then second in just his fifth start and started on the front row and repeated on the podium in his sixth! Three more trips up the podium steps would follow later in the year, one in which he was far and away the rookie points leader in A class and 5th overall in the championship.

At each Toyo Tires F1600 Championship Series weekend, drivers from the Master’s Class are acknowledged with awards sponsored by Brant Flour Mills. Recognition is shared throughout the class over the course of the season, with both standard and some not-so-standard criteria being considered as camaraderie is developed among the senior drivers in the paddock. At season’s end, a single Master’s driver is then recognized among the group with the Cove Dentistry Master’s Award – and this year the recipient was Graham Lobban.

Arriving on the grid in 2013, Graham consistently progressed year-on-year in the B class until he captured back-to-back class championships in 2017 and 2018. Honda power then moved him to A class, where this season his consistency shone through once again. In fourteen starts over five rounds, he scored points each time out and his lowest finish all season long was 8th overall! He was on the podium at rounds two, four and five, and produced a fantastic drive at round three when he started back of the pack on Sunday morning and finished 4th! He set the fastest Master’s lap six times, was the top Master’s finisher ten times and finished 4th overall in the season-long championship, often keeping the kids in check – a Master performance to be sure. Congratulations Graham!

Another standout driver in the Master Class for 2020 is the elder of the racing Lobban siblings. Keith is recognized with the MK Technologies Hard Charger Award. More than a simple acknowledgement of positions gained over the course of a season, the award recognizes Keith’s continued resolve to race toward the front of the field in the Toyo Tires F1600 Championship Series.

After arriving in the paddock during the 2012 season, Keith began his current uninterrupted string of campaigns in 2014 when he placed 7th in B class. A year later he was 5th, and the season after that – 3rd overall. In 2017 he made a move to A class where he was once again 3rd overall, all the while analyzing data and making changes as he engineered his way toward that extra edge which would help him get the most from his car. A year ago Keith moved to a Van Diemen RF98 and 2020 was his first full season with it. Starting all five events and fifteen races, he was in the top ten overall twelve times and finished P8 in the championship, six spots and 87 points better than the year before. Next year we know the charge will continue, and we hope there are fans there to see it.

The final award recognizing a driver from the 2020 Toyo Tires F1600 Championship Series is the MK Technologies Sportsmanship Award. Issued annually to a driver that consistently represents a team, the series and its sponsors positively in the paddock, it is yet another award that extends beyond results on track. Sam Baker is our final driver being recognized, and though he was unable to be on hand to accept the award due to his continuing studies at St. Francis Xavier University, he was nevertheless the man of the moment.

At various points during his rookie and sophomore seasons, Baker found himself on both ends of ‘racing incident’ scenarios, and he accepted both with equal poise. He owns the errors he makes when racing to find time and positions on track, and accepts that others make errors as well when running for records and wins in Canada’s premier open-wheel championship. Sam is always respectful and upbeat on race weekends, is friendly with everyone in the paddock and more than willing to lend a hand when another competitor or the series requires it. His return to school limited his season to just three events, but during that time he matched his Championship standing from a year ago, and scored even more points.

Congratulations to all of the recipients of the 2020 season special awards!