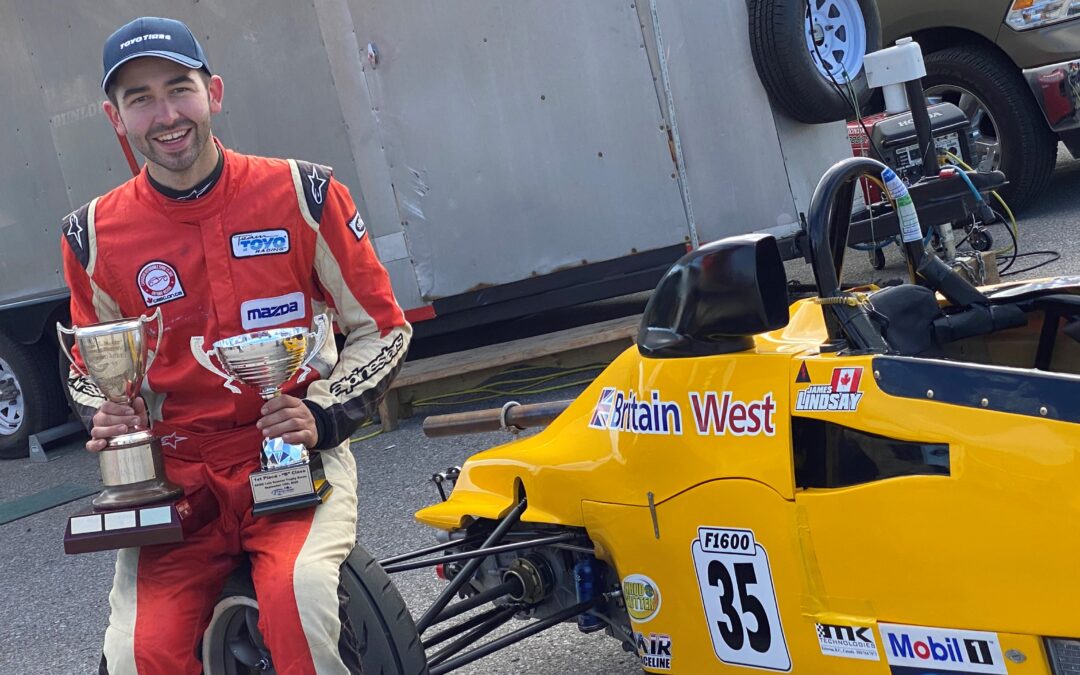 The Toyo Tires F1600 Championship Series was back at its home base over the weekend as drivers and teams returned to Canadian Tire Motorsport Park for the fourth and penultimate round of the championship. The British Empire Motor Club’s Late Summer Trophy Races were on the docket, and it was a special event for B class drivers as the Oliver Clubine Memorial Cup was on offer in the Saturday afternoon run as well. James Lindsay got his hands on that in what came to be his third podium-sweep event of the season, while Mac Clark did the same in A class as both drivers secured overall class championships for 2020!

Mother Nature welcomed crews back to ‘Mosport’ with single-digit temperatures as 12 drivers rolled up in A class and 9 completed the lineup in B. The field had good news to begin the day, learning colleague Mike Stewart had emerged successfully from leg surgery overnight after a heavy crash during Friday practice. Those at the track then got down to business in morning qualifying, with Clark (Britain West Motorsport/Mygale) setting the tone through the first flying lap. Megan Gilkes (Brian Graham Racing/Piper) then bettered the time on the second flyer, before Clark put his name back on top completing his second tour. He then firmly stamped his name on pole position when he bettered the time on five, before posting a CTMP F1600 qualifying track record on eight with a 1:27.955! Gilkes remained second the rest of the way, while Jonathan Woolridge (Brian Graham Racing/Piper) jumped to P3 near the end of the session. Lindsay (Britain West Motorsport/Van Diemen) was the fastest B class car in fourth overall, followed in the fast five by Connor Wagland (Burloak Cycle/Piper). Each of the top five cars was inside the pole time from the opening event of the season!

The day had only marginally warmed when the field took the green flag midafternoon for Race 1, Clark leading the way with Gilkes in tow. The BGR driver set the fastest lap in the field on two and three looking to stay in touch with the leader, but all racing was nullified working lap four after Jack Polito (Brian Graham Racing/Piper) and Keith Lobban (Deep Thought/Van Diemen) had a coming together in turn one scrapping over P7. Five laps behind the safety car then followed, before three more race laps at the end of a caution period. Clark was right back to business in setting the fastest lap in the field on the first one back, and bettered it again on the final tour to confirm his sixth-consecutive victory and ninth from ten starts! Gilkes was unchallenged for the second step of the podium, while after swapping the spot a couple of times early in the race, Lindsay took third overall ahead of Woolridge and claimed the Oliver Clubine Memorial Cup in the process. The BGR driver was still third on the A class podium after emerging from a scrap with Wagland, while joining Lindsay on the B class podium were Andrew Mason (Mason Racing/Van Diemen) and Connor Clubine (Britain West Motorsport/Van Diemen).

Both Clark and Lindsay set CTMP Race lap records in Race 1, and they were side by side Sunday morning on the front row when the second race of the weekend took its green flag. With the exception of no caution period, the second run was a copy of the first for the first two podium steps as Clark cruised flag to flag winning by twelve seconds, and Gilkes was ten seconds up on third place at the checkers. That position was much debated! Lindsay and Wagland swapped the spot through the first half in what became a four-car pack including Woolridge and Graham Lobban. The quartet only crossed the stripe twice in the same order, and were rarely more than one second apart. Woolridge then took a turn at the front of the group a few times in the second half, where a different car led each time over the last nine laps! And in the end, it was the late-arriving Polito that got the spot!

After starting at the back of the pack following a Saturday crash, the rookie made the most of fresh tires in gradually moving through the field. He broke inside the top ten on lap five, and was just catching the back of the aforementioned quartet on lap ten. He reached them on thirteen, took the first pair on fourteen, and the last pair on the fifteenth and final lap when he moved to P3 and the podium! Wagland was fourth, Woolridge fifth and Lindsay sixth overall and first in B class. Joining him on the second podium were Steve Bodrug (Speedpro Imaging/Van Diemen) and Mason.

After running unchallenged through Race 2, Clark and Gilkes were on the front row Sunday afternoon to start Race 3 where two distinct races developed. First off, Clark was once again unchallenged up front, and ran all fifteen race laps under 1:30 on his way to another track record, a weekend sweep and the overall class championship! He was over seventeen seconds clear at the final flag with such consistency, and wasn’t hurt by the fact the six cars behind were dicing with each other lap after lap. Second spot was held at various times through the race by Gilkes, Polito, and Graham Lobban, while Woolridge, Lindsay and Wagland were also in the fray. The group crossed within two seconds of each other every lap in the second half of the race, and on lap thirteen the entire group crossed the stripe in under a second! Gilkes was at head of the line at that point, followed by Lobban, Polito, Woolridge, Lindsay and Wagland. In the end it was Lobban that came out best as he took second on lap fourteen and held it. Woolridge also advanced in the final laps to take third, while Gilkes held on for fourth at the flag. Polito had the roughest ride, as after leading the train through twelve he dropped spots on the final three laps to finish seventh behind Wagland and Lindsay, who was first in B class and secured his second-consecutive class championship in the process. Joining him on the podium in celebration were Clubine and Bodrug.

Once again completing podium activity was the Brant Flour Mills Masters’ Awards, this time presented to a trio in the Master class that demonstrated dogged determination behind the wheel in keeping corner workers and drivers behind on their toes! Sean Johnston (Britain West Motorsport/Van Diemen), Kari Salo (KTS/Van Diemen) and Jeff Bateman (JB/Citation) followed each other home over three consecutive races, and definitely took an adventurous route in doing so! With a raucous podium celebration on Sunday afternoon, it was a great way to end the day and close out Round 4.

The Toyo Tires F1600 Championship concludes October 3/4 as with the CASC Celebration of Motorsport at Canadian Tire Motorsport Park. For the most up-to-date information as the event approaches, please visit formula1600.com and follow the Series on Facebook and Twitter. 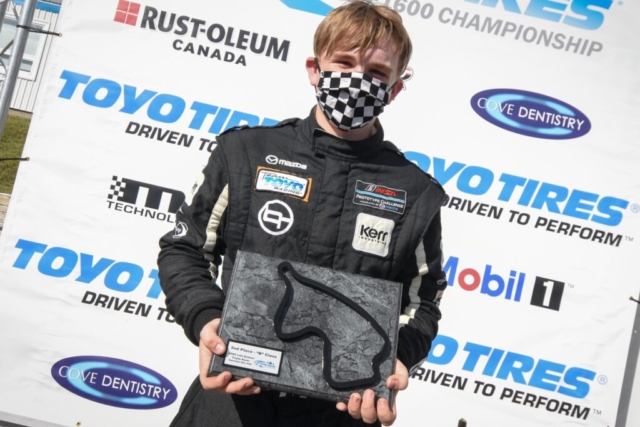 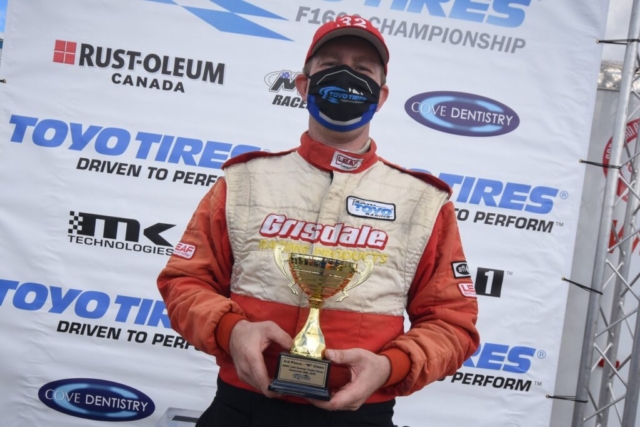 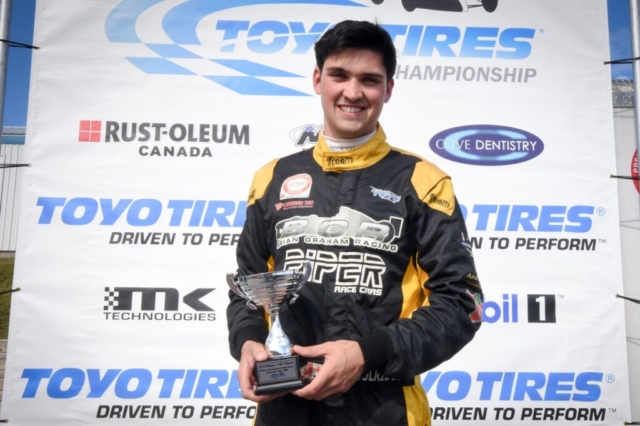