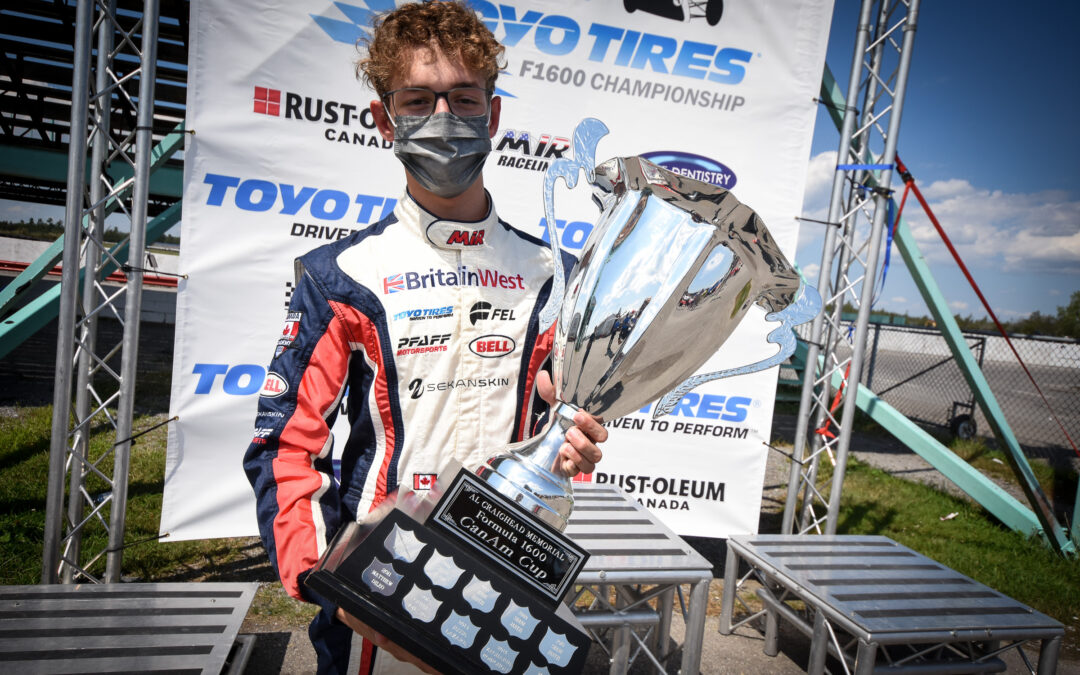 The Toyo Tires F1600 Championship Series raced to its halfway point last weekend as it moved east to Shannonville Motorsport Park and the SMP Cup races. Sixteen drivers made the trek, with ten racing in A class and the remaining six in B class. Championship leader Mac Clark maintained his race-winning form as he swept the tripleheader to make it five wins in a row and eight on the year, while B class very nearly had three different drivers atop the podium in James Lindsay, Andrew Mason and Connor Clubine.

First up Saturday morning in practice the usual suspects were at the head of the line as Megan Gilkes (Brian Graham Racing/Piper) led the way ahead of Clark (Britain West Motorsport/Mygale) and Jonathan Woolridge (Brian Graham Racing/Piper). The same trio were at the top of the charts a short time later in official qualifying, but this time it was Clark leading the way, making the most of fresher tires to post a 1:49.515 on just his second lap – which also established a new track record for the Shannonville Motorsport Park long track! Gilkes set her best lap on the final tour of the session, that coming after a brief red flag stoppage to retrieve a car high-sided near the hairpin that needed to be pulled free. Her 1:51.1 was good for second, with Woolridge once again third. Jack Polito (Brian Graham Racing/Piper) completed the second row, with Sam Baker (Baker Racing/Spectrum) completing the Fast Five on the inside of row three, a line he shared with his father Dean Baker (Baker Racing/Spectrum). Lindsay (Britain West Motorsport/Van Diemen) was the fastest qualified B class car in P7, with Mason (Mason Racing/Van Diemen) right alongside in setting the stage for racing.

Race 1 took to the track under sunny skies Saturday afternoon and it carried special status as the 2020 Al Craighead Memorial Can-Am Cup. The longtime Formula Car aficionado certainly would have approved of Clark’s performance, as the pole sitter went flag-to-flag and removed any possible doubt about the outcome almost immediately. He was two seconds up after two laps, five seconds clear through four laps and continued to take a second per lap to half distance when he switched to race management mode in confirming his third-consecutive win and sixth of the season from seven starts. Gilkes was nearly equally impressive in her return to the field, as the gap to third was extending at an even greater rate. She also had a drama-free run to the podium, and was over twenty-one seconds up on her BGR teammates at the final flag. Polito held third through the opening lap as Woolridge suffered at the start and fell down to fifth; Lindsay getting by as well. It took Woolridge three laps to recover the spot, and in two more he was back into podium position, though well behind Clark and Gilkes.

Polito and Lindsay ran isolated in fourth and fifth from there, while the back half of the top ten featured a couple of recovery runs. After qualifying sixth, Dean Baker fell off at turn six on the opening lap and was down to twelfth the first time across the stripe. He reappeared in the top ten after the second flier, got ninth a lap later and eighth two laps after that. In the middle stages he inherited seventh when Mason retired after a touch with the wall, then he ran down Clubine (Britain West Motorsport/Van Diemen) in the closing laps for sixth, his final finishing position. Similarly, Keith Lobban (Deep Thought/Van Diemen) dropped outside the top ten early and created an afternoon task for himself. He returned to the top ten on lap six when Sam Baker had an issue on the back straight, got ninth when Mason retired and set his fastest lap of the race in catching and passing Steve Bodrug (SpeedPro/Van Diemen) for eighth. The Masters pair then perfectly spaced the B class podium, which was Lindsay in fifth overall, Clubine in seventh overall and Bodrug in ninth overall.

In winning Race 1 in dominating fashion, Clark also confirmed pole position for the Sunday morning start with Gilkes alongside, but a much different day was on hand with a new layout, a wet track and lightning in the area delaying proceedings. Taking the green mid-morning, drivers were immediately slip-sliding away. Gilkes made the most of having the outside line to take the lead through turn one, Clark filed into second and Woolridge third. Polito and Clubine were the first pair off in a race that would see many off-track excursions as the field worked to adjust to a much different surface. A quartet worked free of the rest in the early going, as Graham Lobban (Jaftrman’s Garage/Van Diemen) quickly joined the fray all the way from P16 on the grid! Woolridge took second through lap four, but Clark had it back a lap later when he began to make a push for the lead. He set the fastest lap of the race in closing to within a second, and when Gilkes overshot the end of the back straight a lap later Clark returned to the head of the line with Woolridge also assuming second. The gap between the pair was over three seconds at half distance, but Woolridge closed it down in the second half when he set his best laps consecutively on laps nine, ten, eleven and twelve! On the last lap he bettered the fastest lap outright, but Clark held firm, winning by three tenths. Woolridge was second, and after swapping the spot once in the late going, Gilkes secured third ahead of Lobban.

The Baker tandem crossed fifth and sixth, Sam crossing before Dean in the higher position after coming back from P7 early, and they were followed by a fantastic fight for the B class podium. At half distance Lindsay, Mason and Bodrug were running in a pack with Clubine and Sean Johnston (Britain West Motorsport/Van Diemen) next in line on track and looking to pick up a podium spot if the opportunity presented itself. Running nearly identical lap times, Lindsay set his best on eleven and lowered it on twelve, but Mason did the same on twelve and Bodrug set his best on fourteen. It came down to the final lap, and in the final corner Mason got by to take the checkered flag first… only to have officials intervene. With a car off track earlier in the lap, the drivers had passed a yellow flag and had not yet received a green flag to resume racing despite passing a flag stand prior to the final corner. Lindsay had his position restored, Mason had to settle for second after the unknowing infraction and Bodrug was third ahead of Clubine and Johnston.

The weather had cleared for Race 3 Sunday afternoon, where Woolridge was on pole position ahead of Clark, Lobban and Gilkes. The same quartet owned the top four positions at the final flag, but not without some movement and changing gaps. For his part, Clark was clinical in making it five wins in a row and eight of nine on the season. He took the lead on the first lap and extended it from start to finish. He was thirteen seconds clear at half distance, and over twenty up the road at the final flag having lapped up to seventh. Woolridge went the distance in second spot, but not without some cause for concern. While he was comfortably isolated early on, Gilkes got his attention when she got to third spot and set to cutting down a seven-second gap to her teammate. It was just over four seconds at lap ten with the chaser lopping off about a second per lap until it became an even one-second margin. Woolridge was certainly aware by then, and though Gilkes would continue to edge closer running to a nineteen-lap race distance, Woolridge held onto the spot by 0.375 seconds in setting the A class podium positions.

Graham Lobban also had to work to maintain his position as Polito had come from eleventh on the grid and was closing in on a top-four finish in the closing laps. Lobban had the best response he could deliver, as he set his best lap of the race on fourteen and lowered it on sixteen, seventeen and eighteen in keeping clear of the hard charger of the race. Dean Baker, Keith Lobban and Michael Stewart ran the back half in isolation, while Clubine scored his first B class win in crossing ninth overall. After Lindsay had retired early due to contact and a broken exhaust, the BritWest driver gradually closed a gap to Bodrug – only to spin in the hairpin as he was applying pressure and looking for a way past! One lap later though, Bodrug repeated the feat in the second last corner with a spin of his own that allowed Clubine through to the lead! Johnston also got by for second in class, while Bodrug rejoined and crossed third.

Standout efforts by the master class were also noted at the final podium presentations as Graham Lobban and Bodrug received Brant Flour Mills Awards. Lobban was recognized for his wet-weather drive from the back of the pack to fourth in Race 2 and repeating in fourth overall in Race 3. He also set the fastest masters lap in both his starts on Sunday. Bodrug was the race hard charger in the opening start, and was on the B class podium following all three starts at Shannonville.

The Toyo Tires F1600 Championship returns to Canadian Tire Motorsport Park September 19-20 for the BEMC Indian Summer Trophy Races. For the most up-to-date information as the event approaches, please visit formula1600.com and follow the Series on Facebook and Twitter.