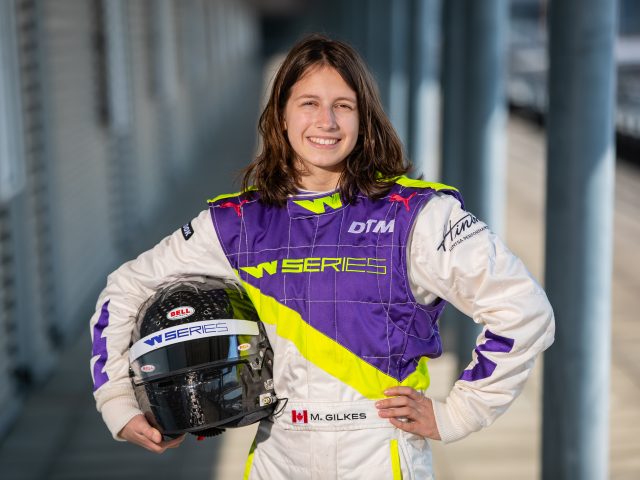 It’s not often a newcomer to the Toyo Tires F1600 Championship Series is returning from a season of competition in Europe, but such is the case this year with 19-year-old Megan Gilkes. The rookie that starred in the opening round at Canadian Tire Motorsport Park raced in the inaugural season of the W Series last year, one of just twenty female drivers from around the world that made the cut to race in front of thousands of fans supporting the German DTM championship. That effort also led to the Richmond Hill native earning the Canadian Automobile Sport Clubs’ Wayne Kelly Memorial Award for bringing special recognition and prestige to Ontario motorsport, and she’s put herself on a path to Formula 1 at the same time. An Aeronautical Engineering student at the prestigious Imperial College of London, she’s already interned at Mercedes Grand Prix and presented at the McLaren Technology Centre. She’s definitely on the fast track, but F1600.com slowed her down enough to get the full story.

I started racing karts when I was 10 years old living in Barbados and continued in 2015 in Canada. I won a club championship in Ottawa and finished runner up in the Eastern Canadian Karting Championship before moving to open-wheel cars. I raced a Formula Vee in 2017 and 2018 with Vallis Motorsport, winning three of the rounds of the US Challenge Cup Series at Mosport. I also did a few races in Formula 2000. I won an SCCA Majors race from pole position and ran two additional F2000 races as well. Then, last year, I made a big step in my racing career when I qualified for the W Series, an all-female open-wheel championship that aims to see female drivers at the highest levels of motorsport. I scored a lights-to-flag victory from pole at Assen in the Netherlands, and also raced at famous tracks like Hockenheim, Zolder and Brands Hatch. This year I am back racing close to home, with the goal of returning to racing in Europe professionally again in future seasons.

I grew up watching my dad racing Formula Vees and Formula 2000’s in Canada and the US, but the first time I actually drove was when a work colleague of my dad’s offered me a go in his son’s kart. When I first drove the kart, I was hooked, and since then the more I’ve driven, the more my passion for motorsport has grown. Racing has become the industry I want to have a career in, whether that be as a driver or as an engineer.

Have you driven an F1600 car prior to the season? If yes, what was your first impression?

I drove an F1600 car with Brian Graham Racing for one test day at Shannonville and the pre-race test day at Mosport, then went straight into the first race weekend of the year. I really enjoyed driving the car right from the first session. It has a combination of plenty of horsepower from the Honda Fit engine, and the treaded Toyo tires and no downforce means that there is lots of opportunity to have some fun sliding the car around. Brian Graham Racing is a great team and the car has run flawlessly for every session I’ve had, so I’ve been able to use my limited time in the car to the maximum and get myself dialed into it while working with the team to set it up to suit my driving style.

What is your number and why did you choose it?

Usually I run the number 49, as that was the number I had on my first race car, and I’ve used it when I can ever since. But since I’m running with Brian Graham Racing this year and the cars already came with numbers, I’ll be racing the number 3 car.

What track raced has been your favourite? Why?

I’ve been very fortunate to race at some amazing tracks around both Europe and North America, and even Interlagos in Brazil, but my favourite track has always been the one I first raced at: Mosport. The fast, blind corners, the elevation changes, and the amazing atmosphere every time I’ve been there are unrivalled. The staff at the track, especially the marshals and grid crew are the friendliest I’ve come across, and it being my home track makes it even more special.

What track would you love to race around? Why?

I was really looking forward to racing at Montreal this year in the Grand Prix support race. I really enjoyed driving on a street circuit last season, and Circuit Gilles Villeneuve looks like a great track to drive. To have been racing on the same weekend as F1 would’ve been an amazing experience, and I really hope the event still goes ahead!

Definitely the highlight of my racing career so far was my race win in Assen last season in the W Series. It was a reverse-grid race based on championship points and I started from pole due to some issues I’d had earlier in the season. I led from lights to flag, but not without drama! I had to fend off some very experienced drivers, most notably Alice Powell who finished third in the overall championship and had a race win and multiple podiums herself. After making a good start, I led and opened up a gap over the next couple of cars but a few laps in the safety car came out! I made a good restart and opened up another gap on the field but the safety car came again with just three laps to go! By this time many of the front-running drivers had made their way forward and when the green flag waved the final time I had to defend like my life depended on it. My last-lap battle with Alice was a memorable one, and to win by 0.003 seconds added to the excitement. After the race, one of my proudest-ever moments was standing on the top step of the podium with the Canadian national anthem playing.

My favourite driver is Divina Galica. She drove in Formula 1 in the 1970’s and tried to qualify for a few Grand Prix but unfortunately couldn’t due to inferior equipment. I was very fortunate to meet her when she was my instructor at the Skip Barber racing school I attended when I first started in cars. Since then I have kept in touch with her and she has been a role model and a mentor for me. She is a driver who has achieved so much in motorsport that I would someday like to achieve as well. We worked really closely together during the W Series last year, and I am really hoping to work with her again in the near future once the lockdowns lift.

What are your goals for 2020 and beyond?

Since this is my first season in F1600, my expectations are changing with every race. Having had such a promising first round with a pole position, three second-place finishes and two fastest laps, my expectations are high. I’m looking to improve upon this over the next few rounds and hope to get some wins under my belt and go from there. I know it will be tough because I’m up against some very strong competition, many of whom have had at least a year of F1600 racing already, but I think based on how well the first event went I’m up for the challenge. Beyond 2020, I would like to go back to race professionally in Europe again while continuing my educational journey into motorsport as well