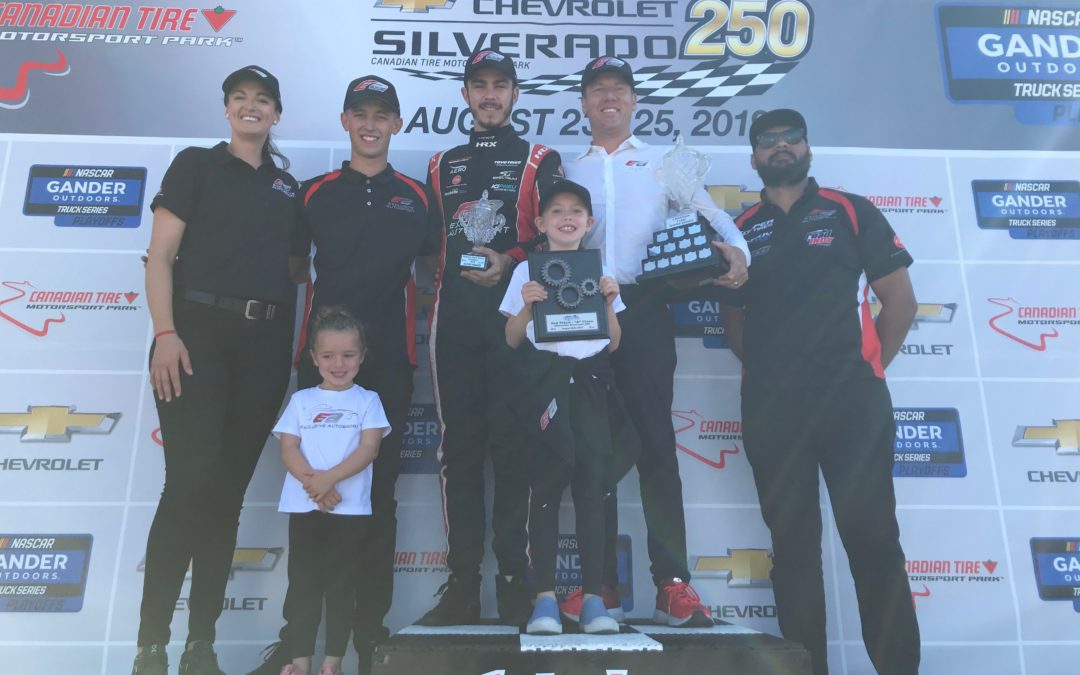 The 2019 Toyo Tires F1600 Championship presented by FEL Automotive Learning + Promotion raced its final round over the weekend as the series returned to Canadian Tire Motorsport Park as part of the Chevrolet Silverado 250 race weekend. The Canadian F1600 Super Series was also completed over the weekend, and in both cases Olivier Bedard secured the championship! Maintaining the dominant fashion he has shown all season long, Bedard took the first two starts of a weekend tripleheader to secure the title in A class, while James Lindsay swept the schedule in B class to capture that class championship. Matt Barry took Rookie-of-the-Year honours after podium results on both Saturday and Sunday, and an amazing weekend of racing brought the curtain down on the 2019 season.

Qualifying late Friday afternoon saw 24 cars take to the track and Bedard (Exclusive Autosport/Spectrum) got right down to business. Immediately in the 1:29 bracket on his first flying lap, the native of Terrebonne, Quebec, then lowered pole time on consecutive laps early in the session. Fellow title contender Zachary Vanier (Britain West Motorsport/Mygale) slotted P2, and they were followed by David Taylor (Vallis Motor Sport/Van Diemen), Matt Gidman (Britain West Motorsport/Mygale) and Mac Clark (Brian Graham Racing/Piper) when a red flag brought pause to the session. When action resumed, drivers had a handful of laps to alter the order and things went fast and furious. Jonathan Woolridge (Brian Graham Racing/Piper) jumped to P4, his teammate Clark posted P5, Vanier got to within a tenth of pole time and then Barry (Brian Graham Racing/Piper) also went under 1:30 and posted P3! Bedard then shushed the field on his next flyer when he posted a 1:29-flat that would not be challenged. Vanier responded with his best for P2, Taylor did the same in returning to P3, Barry was fourth and Lindsay (FelDrives/Van Diemen) jumped to the top five with Guillaume Archambault (CMV) alongside. The field was then set for race action Saturday.

Race 1 of a weekend tripleheader saw Bedard hold his lead through the first lap followed by Vanier, Barry and Taylor. The order remained the same through two, but before the third lap was out the field went under full course caution as crews went to retrieve the stricken car of Connor Wagland (Burloak/Piper). Barry had set the quickest lap on two, and following four caution laps he was right back on it, bettering the fast lap on seven, and doing so again through eight when he led the field across the line! Bedard and Vanier responded by bettering his pace in the 1:29 bracket and were quickly back to first and second. Things then got even worse for Barry as his car died on lap eleven and he retired from the race in turn five. Time for two laps remained, and though Vanier hounded the leader, Bedard secured the win with Vanier on his tail at the line. Taylor had maintained fourth the entire race distance, and moved up to podium position when Barry was forced to retire. Clark had a solid run from eighth to fourth, Archambault was fifth and B class winner Lindsay was sixth overall. Steve Bodrug (Van Diemen) and Bill Tebbutt (Van Diemen) completed the B class podium. The field then set to prepping for Race 2, and while crews worked to ready the cars, drivers met some of the 75,000 Silverado 250 fans during an autograph session. The vibe in the paddock was electric, though as Race 2 hit the track, it may have gotten the better of some.

Vanier was on pole position after setting the fastest lap in Race 1, but Bedard got top spot back to lead the field through the first stages of the race. Vanier was once again in chase mode before taking over top spot working seven, just before a massive wreck at the end of the Mario Andretti Straightaway put the field under caution for the second straight race. Taylor went looking to the inside of Clark racing into turn eight but locked up just as Clark was turning into the corner. The contact sent Clark upside down and sliding into the tire barrier on his roll hoop! The young driver emerged uninjured shortly after, and the field was then set to face a NASCAR style green-white-checker finish. Vanier maintained his lead over the first lap, but Bedard got by on the back straight running the second and took his 12th win of the season, all but officially securing the 2019 Toyo Tires F1600 A Class Championship. Vanier was second, and things finished much better for Barry in Race 2 as he ran nearly the entire race distance in third and stood on the final podium step. He also set the fastest lap of the race, and was then headed for pole position in the final start of the season. Lindsay was fourth overall, and in winning the B class once again added to what has been his first F1600 Championship season. Wagland charged through the field to finish fifth, 21 spots better than where he started, and Sam Baker (Baker Racing/Spectrum) was sixth. Bodrug was once again second on the B class podium, with Mike Lee (Blue Gates/Van Diemen) third.

The Canadian F1600 Super Series title was still undecided headed into the finale, and Vanier knew he needed a win and some help has he lined up off-pole with Bedard directly behind on row two. Lindsay lined up P3, directly behind polesitter Barry as the final race of the season responded to a waved green. It didn’t take long for the order to shuffle, as through one Bedard was right back at the head of the pack followed by Barry, Vanier, Archambault and Wagland. Vanier then set the fastest lap in the field on two as he moved up to second, and repeated the feat on three as he went to the head of the line in kicking off what was to be a fantastic fight for the win. Bedard then went fastest lap to the lead on four, Vanier did it again on six, and Bedard took it back on seven before field went under caution for an incident involving Gidman and Keith Lobban (Van Diemen) in turn nine. For the second race in a row, the field was headed for a green-white-checker finish. The green waved to begin lap twelve and Bedard led the lap with Vanier chasing. They remained that way for most of the final lap as well, but Vanier produced a fantastic move around the outside in turn eight and secured the win through turns nine and ten! Vanier had his sixth win, and third in the Super Series, but with second spot Bedard confirmed both the Toyo Tires F1600 Championship and the 2019 F1600 Super Series Championship! Barry ran all but the first lap of the race in third, and in reaching the podium once again earned Rookie-of-the-Year honours.

The action just off the podium was intense as well, with Archambault, Wagland, Lindsay and Taylor running in close quarters into the final laps. In the end it was Lindsay who moved up and secured fourth position at the final flag, winning the B class once again in the process. Archambault was next followed by Wagland, while Taylor bowed out during the flurry to the finish after getting wide in turn eight and spinning off. Baker was seventh in the final start, Woolridge eighth, Varun Choksey (Exclusive Autosport/Spectrum) ninth and Graham Lobban (Van Diemen) completed the top ten. Bodrug was the second B class car across the line for the third-consecutive run, while Tebbutt was third in completing the B class podium.

In the final Toyo Tires F1600 Championship A class tally, Bedard produced twelve wins from fifteen starts on his way to the title and added three second-place finishes for 432 total points. Vanier scored six wins and added eleven additional podium results on his way to 396. Barry was top rookie and third overall after nine podium runs led to 256, Clark was fourth with 204, and Woolridge completed the top five with 199 points – all three in the rookie class of 2019. In B class, Lindsay also produced twelve wins and had four second-place finishes on his way to 456 points. Mike Lee scored a win among eleven podium results for 291 points and Bodrug had a pair of wins and ten podiums on his way to 242. In the final 2019 Canadian F1600 Super Series classification, Bedard had three wins and six podiums for 157 points, while Vanier had two wins and five podium finishes for 147 points.

The Toyo Tires F1600 Championship presented by FEL Automotive Learning + Promotion is Canada’s premier open-wheel racing series, contested by both veteran racers and up-and-coming motorsport stars. The series features open-wheel race cars powered by both Ford and Honda motors, and provides one of the most cost-effective forms of formula car competition in racing. Canadian Tire Motorsport Park is home to the Toyo Tires F1600 Championship, and the series also visits Calabogie Motorsports Park and Shannonville Motorsport Park during the season. Each championship round consists of an official practice session, qualifying session, and three feature races spread over two days. For more information, please visit formula1600.com