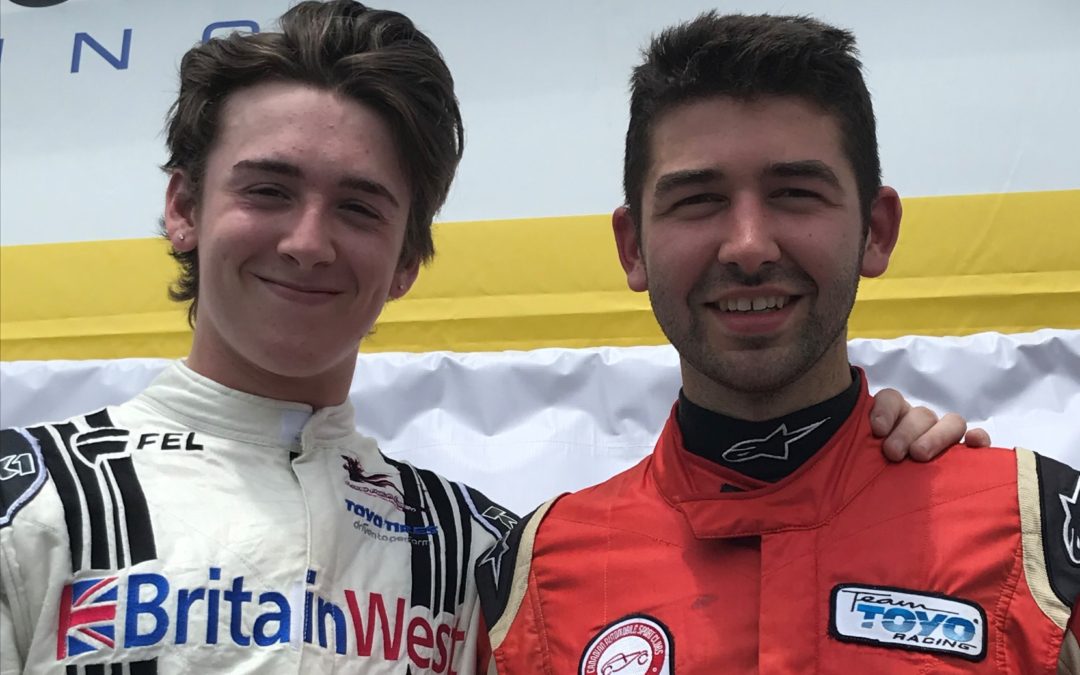 The 2019 Toyo Tires F1600 Championship kicked off its second half Canada Day weekend as the series made its annual trek to Shannonville Motorsport Park. Running as part of the Canadian Touring Car Championship Summer Challenge, competitors faced the 4km Long Track for a single start on Saturday before running the 2.5km on Sunday . Zachary Vanier scored a pair of wins in A class while James Lindsay swept the weekend in B class.

It was a small field of 12 that took to the track for qualifying Saturday morning but they were doing very big things. Vanier (Britain West Motorsport/Mygale) smashed the Long Track record in A class with a 1:49.704 and Lindsay did the same in B class with a lap of 1:51.660. Each was a new benchmark by over a full second! Following Vanier overall were Olivier Bedard (Exclusive Autosport/Spectrum), Matthew Barry (Brian Graham Racing/Piper), Mac Clark (Brian Graham Racing/Piper) and Connor Wagland (Burloak/Piper) in the fast five. B class was a trio that were each bound for the podium with Stephen Adams (Flagship Racing Services/Lola) and Mike Lee (Blue Gates/Van Diemen) following Lindsay. The top four clocked inside of a second of each other.

Vanier made good from his first pole position of the season that afternoon and with Bedard in tow the pair immediately began gapping the field. Excitement then arrived on lap three when Bedard’s engine cover flew off and landed in the pit lane! He continued on with a stripped down version of his Spectrum, but there was no getting by Vanier on this day. The BritWest driver led flag to flag and crossed nearly four-tenths up in securing his first Toyo Tires F1600 Championship win. Bedard hounded Vanier the entire way and had a few looks at the leader before settling second, while Barry and Clark also finished where they qualified in crossing third and fourth. Just as he did in qualifying, Vanier set a new race lap record when he clocked a 1:50.355 on lap three. Lindsay continued the record setting trend in B class as well, clocking a 1:52.907 on lap five on his way to his first win of the weekend and P6 overall. Adams was second in the beautifully restored FRS/Lola 540, while Lee was knocked into retirement on lap ten. The pair were joined by Sam Baker (Baker Racing/Spectrum) and Michael Stewart (Brian Graham Racing/Piper) in a four-car battle when Stewart spun exiting turn four. Lee went left taking evasive action, but contact to his right rear ended the run for both.

Fastest lap in the Saturday race put Vanier on pole for the Sunday morning start as well, this time with the field facing the shorter Pro Track configuration. Lap one was a completely different affair, though, as the sophomore driver went off at the end of the back straight giving a free pass to nearly the entire field! Bedard capitalized and never looked back on his way to a near five-second win, with attention then focusing on a rebounding Vanier. He picked off drivers one by one through the first half of the race and began the second half by moving into podium position when he broke up BGR teammates Clark and Barry. The pair were having a terrific battle of their own, and when Barry passed his teammate on lap ten Vanier followed along. He then got Barry himself a lap later to reach second, but it was of little concern to Bedard in running to the final flag and the four crossed in that order: Bedard, Vanier, Barry, Clark. The B class trio crossed in the same order once again, Lindsay ahead of Adams and Lee, and for the second day in a row, the FRS family lost track records in the process. Michael Adams held the previous A class record on the Pro Track and father Stephen the B class, but both were eclipsed in race two. Vanier set the new mark in A with a 1:09.177 while Lindsay did the same in B with a 1:10.869!

The track record in race two had Vanier on his third-consecutive pole but Bedard had the best start this time and led Barry and Vanier after the first flying lap. Vanier recovered second on lap two, but the field looked to be spreading in the final start and drivers were settled in. At half distance Bedard led Vanier by 1.5 seconds but then the gap began to consistently close, and by the last lap it was gone altogether! Vanier made a bid for the lead at the hairpin and Bedard held, and he was still leading into the final corner when his car was struck with gearbox failure! Vanier went around to win, while Bedard managed to crawl across the line and secure second before Clark in third. Mechanical problems hit in B class as well, as Lindsay secured a weekend sweep in a run where Adams limped to the line with a broken engine mount and Lee retired with rising water temperatures.

The final two rounds of the championship will be contested at Canadian Tire Motorsport Park in July and August. Through four rounds, Bedard continues to lead at 348 points with Vanier second at 271. Three BGR Rookies come next as Barry leads the rookie class at 172, followed by Clark at 162 and Jonathan Woolridge at 126. Lindsay extended his B class lead at Shannonville and has now reached 301 points on the season. Lee is second at 243, the only pair to contest the entire schedule to date.