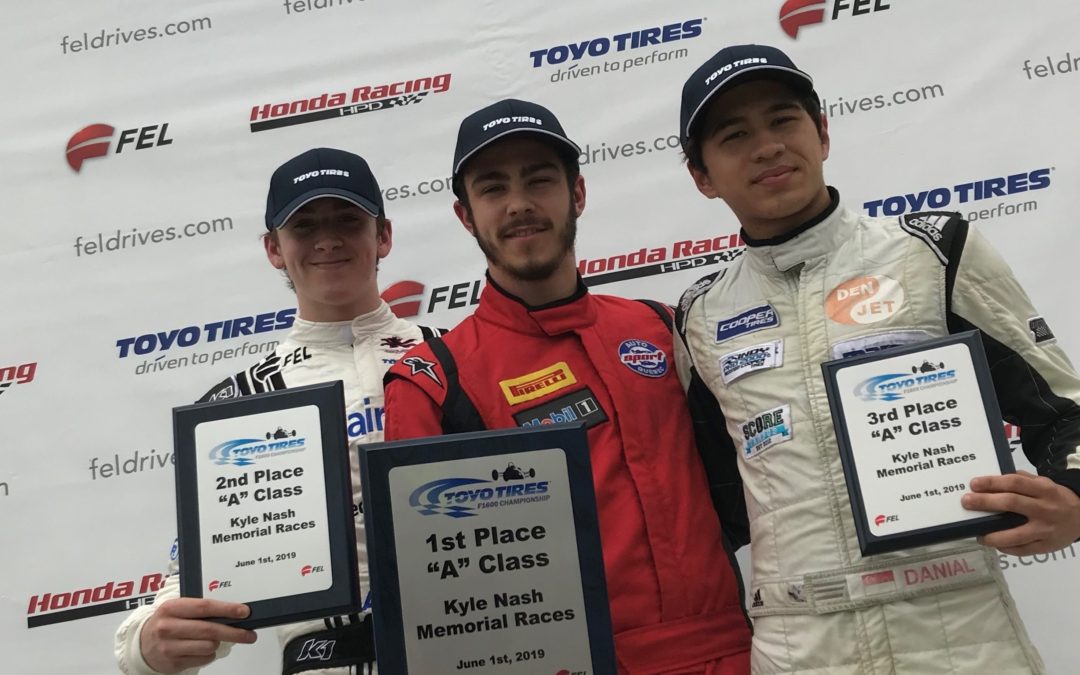 The 2019 Toyo Tires F1600 Championship contested its second round a week ago as the series made its annual stop at Calabogie Motorsports Park. This season as part of the Kyle Nash Memorial Races, drivers once again faced the unique challenge of racing the Stadium Track on Saturday before the 5km Full Track Sunday. It made little difference to championship leader Olivier Bedard though, as he remained perfect on the season in A class while James Lindsay swept the B class.

Zachary Vanier (Britain West Motorsport/Mygale) paced the field in Friday practice but when a field of 13 took to the track for Saturday qualifying all were once again chasing Olivier Bedard (Exclusive Autosport/Spectrum). His lap of 1:13.077 was nearly four tenths clear of Vanier in P2, who was in turn nearly four tenths clear of Singapore’s Danial Frost (Exclusive Autosport/Spectrum), who was making an F1600 start in preparation for the F1 Canadian Grand Prix weekend. The fast five was completed by Matthew Barry (Brian Graham Racing/Piper) and Connor Wagland (Burloak/Piper). The top five was covered by one second flat.

Race one later in the day was a straightforward affair as the field ran green from start to finish, just as it did in the season opener at Canadian Tire Motorsport Park. Bedard had little trouble in cruising to a nine-second win over eighteen laps while Vanier crossed second ahead of Frost and Wagland. Two post-race infractions added a spot of excitement though, as Bedard erred in stopping in his pit box and Vanier’s car failed a Vtech test. The former picked up a two-position penalty for the start of race two, while the latter was disqualified. Frost then moved up a step on the podium creating an EA 1-2, and Wagland took third ahead of BGR teammates Mac Clark and Matthew Barry. In B class there was just a pair in action as Lindsay took his second class win of the season and jumped to the class point lead with Mike Lee (Van Diemen) crossing second.

Overnight rain left the track wet and drying Sunday morning as teams and drivers arrived for races two and three on the Full Track. Previous penalties meant Bedard was on Row 2, and Vanier was starting from the back of the pack. Frost was then on pole racing his second new layout of the weekend, and had another strong drive en route to a runner-up finish once again. Bedard was the only driver to get by in a nine-lap run, scoring his fifth straight win in the series and eighth straight in F1600 racing this season. Vanier had an inspired drive and was up to fourth position by half distance. He got one more spot in the back half to reach the podium, then picked up the Hard Charger of the Race Award for his efforts. In B class Lindsay had the measure of Lee once again, and point advantage stretched to ten points through five races.

In the final start of the weekend Bedard was back on a familiar pole position with teammate Frost alongside, and Vanier and Lindsay on row two. Bedard and Vanier quickly established what would become a 1-2 finish, making it nine straight overall for the EA driver, while an epic battle for the final podium spot ensued. Lindsay held it through the first half, the B class driver making a mark among newer A class cars, but others came calling in the second half. Frost wrestled his way by and into third on lap six, only to have Graham Lobban (Van Diemen) do the same to him on the penultimate lap and edge him by two tenths at the final flag! Lindsay took solace completing a weekend sweep in B class and added another six points to his class-leading margin.