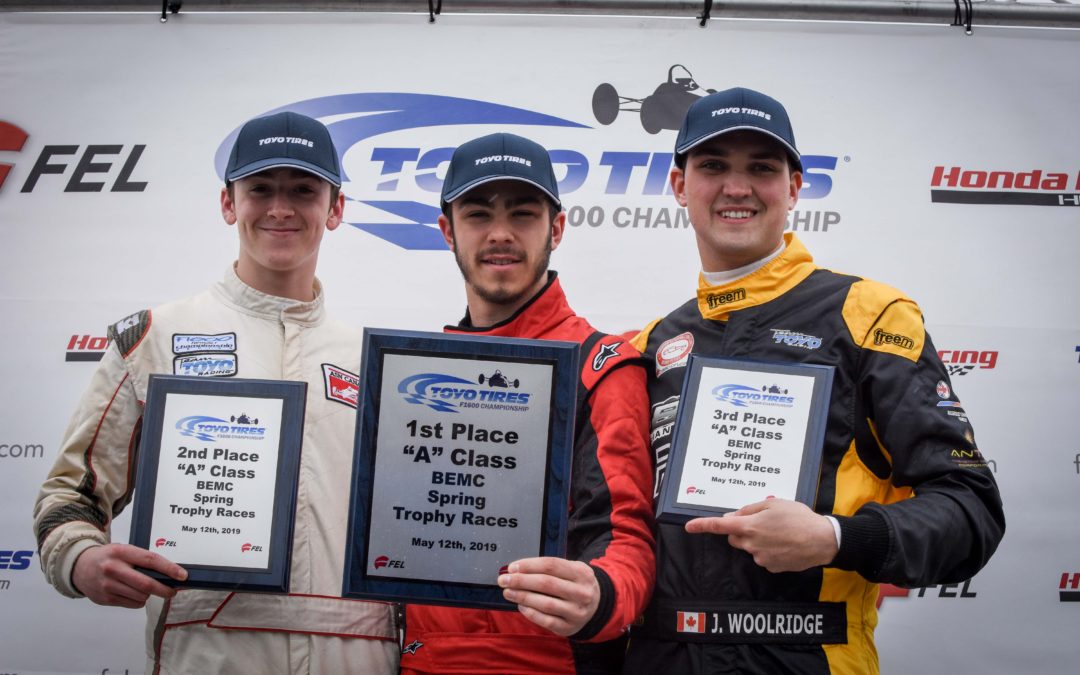 The 2019 Toyo Tires F1600 Championship kicked off last weekend at Canadian Tire Motorsport Park. The BEMC Spring Trophy Races were the first three of eighteen on the schedule, and a field of 20 was met with cold and wet conditions as the season got underway. Olivier Bedard swept the weekend in the A class, while the B class saw Mike Lee, James Lindsay and Steve Bodrug each produce a class win.

Qualifying near midday on Saturday saw Olivier Bedard (Exclusive Autosport/Spectrum) take pole position with a lap of 1:29.034 in cold but dry conditions. The next drivers in the fast five were: Zachary Vanier (Britain West Motorsport/Mygale), James Lindsay (Van Diemen), Jonathan Woolridge (Brian Graham Racing/Piper) and David Taylor (Vallis Motorsport/Van Diemen). The top five were all covered by less than a second on the clock, and the top ten by just over two.

Closing the day’s track action with Race 1, Bedard and Vanier then produced an epic battle for the win. Through the first ten of fifteen laps, Bedard led four times across the line while Vanier led six with the leader consistently switching! They were in nose-to-tail formation until the closing laps, when Vanier began dealing with an issue and Bedard slipped over two seconds clear. Matthew Barry (Brian Graham Racing/Piper) emerged from a final corner fray to score P3 in the first F1600 run of his career and complete the A class podium. Mike Lee (Van Diemen) led the B class cars in the first start, crossing tenth overall and one spot better than Steve Bodrug (Van Diemen). Rookie Calvin Coey (Swift) wrapped the podium in his first event and David Taylor earned the Brant Flour Mills fastest master award. The race was green from start to finish, a stat that would not be repeated one day later.

With the fastest race lap in the opening run, Bedard was once again on pole in race two, a race that was interrupted by a pair of full course caution periods and ended behind the safety car after eleven laps. After holding at the start, Bedard scored a flag-to-flag win. Vanier was third after the first flying lap before going the rest of the way in second, and Woolridge got the first podium of his rookie season in taking third. In B class Lindsay scored the first win of his career in crossing fifth overall while Bodrug and Lee repeated on the podium in Race 2. Graham Lobban claimed the highest finishing masters spot finishing sixth.

The final start of the weekend was run on a wet track with rain falling. Attrition and hobby racing sensibilities saw only 14 cars engage, and the number was reduced to 13 when a crash in the first corner on lap one led to the first red flag of the weekend. Bedard had once again started on pole, this time after setting the fastest race lap in Race 2, but Vanier was the early leader. Bedard recovered the spot after a pair of race laps, then ran it to the house with another red flag period coming late. Vanier was second once again, and taking third in the first podium run of his career was Mac Clark (Brian Graham Racing/Piper). In B class, Bodrug was on the podium for the third time, this time on the top step after gaining ten positions and crossing fifth overall! Lindsay followed his first win with P2, and Lee repeated in P3.