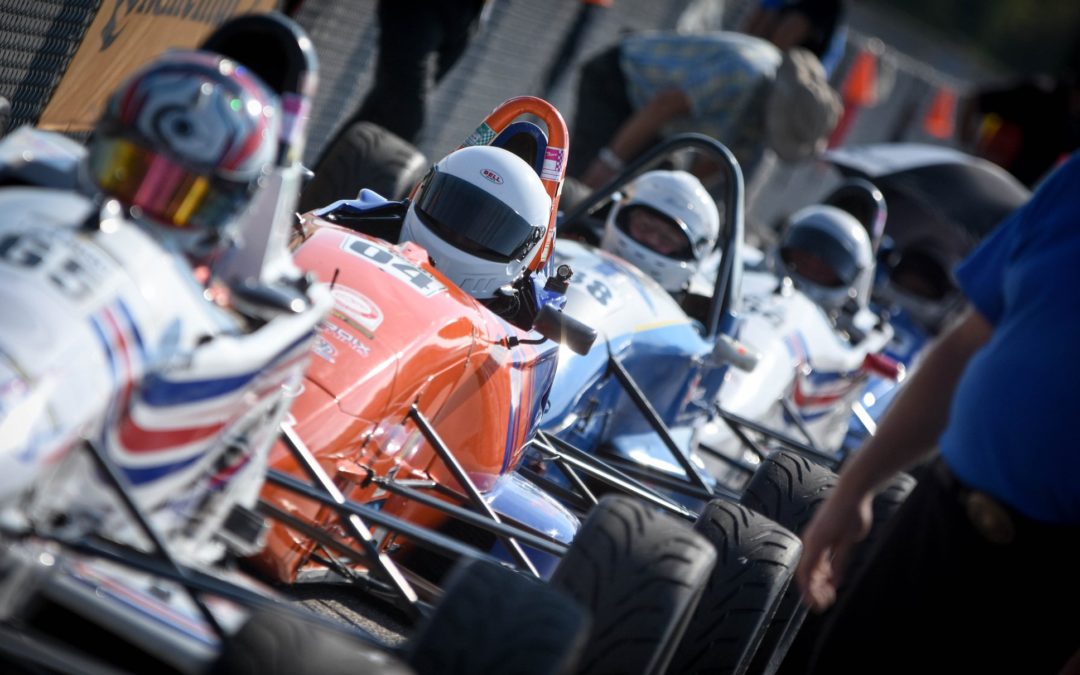 The Toyo Tires F1600 Championship Series headed north to Calabogie Motorsports Park and the Ted Powell Trophy Races in mid August – the penultimate round of the 2018 Championship. Points leader Kellen Ritter was looking to extend a 21-point lead over Jake Craig and the rest of the field, and it certainly proved to be an eventful weekend with close racing, penalties and multiple on-track incidents!

After familiarizing themselves with both the long and short track configurations during a Friday test day, drivers woke up to sunny skies Saturday, ready to tackle the short track. Brian Graham Racing/Piper pilot Craig was fastest in practice while Ritter was P6 in his Exclusive Autosport/Spectrum. Between the title contenders were: Matthew Taskinen (EA/Spectrum), James Lindsay (Van Diemen), visiting driver Guillaume Archambault (CMV) and Zachary Vanier (Britain West Motorsport/Mygale).

Qualifying had already showed times dropping from practice when the first of two red flags interrupted the session. With a car in a precarious position on track, drivers entered the pits with the clock stopped at its halfway mark. As the session resumed, one car was dropping oil and drivers only completed an out lap before a second red was displayed! A half hour delay followed as the track was cleaned, and when the session resumed for a second time just 6:30 remained on the clock. As it was, no driver improved on the slick track, and Ritter took pole followed by EA teammates Spike Kohlbecker and Taskinen ahead of Archambault and Craig.

The field would see red once again shortly after the green flag dropped Saturday afternoon for race one. Ritter had made good from pole position, but as drivers came around to complete the first lap a red flag was displayed as Ross Smith (Britain West Motorsport/Mygale) had crashed heavily following the start. With the driver safe and the crash cleared, the field was then reset and a full restart followed. Ritter then repeated his first start and ran flag-to-flag despite Archambault filling his mirrors from start to finish and crossing just a tenth behind. Meanwhile, Vanier was producing the hard charge of the race in moving up four positions to join Craig and Kohlbecker in a battle for the last step on the podium. He secured the spot with a last-lap pass on Craig, who dropped to fifth in the process, losing precious championship points.

Rain fell overnight and drivers faced a damp circuit as they prepared for the long track Sunday. Intermittent drizzle through the morning kept the track damp heading to race two, but more dramatic in the lead-up was the absence of all Exclusive Autosport team cars as the grid marshal counted down to the three-minute board! Kohlbecker and Taskinen arrived just in time, but championship leader Ritter did not and was therefore relegated to the back of a 22-car field beginning what would prove to be a roller-coaster of a day! Determined to get back to the front and confident he had the speed to do so, the championship leader was tenth after the first lap and in podium position at the chequered! He crossed just six tenths behind the winner in third – only to have a blend line infraction penalty demote him all the way back to 12th! Craig, Archambault, Vanier and Kohlbecker fought for the win at the front, with five lead changes throughout the race before Craig emerged victorious ahead of Archambault. Vanier and Kohlbecker crossed 4th and 5th respectively before each moved up one position in the final classification. The drama-filled win allowed Craig to close the gap on Ritter to just 13 points.

Though Ritter took a points hit in race two, consolation came in the form of pole for the third and final race of the weekend. Craig and Vanier once again joined in the fight at the front and while the lead changed hands, Ritter controlled the second half of the race to collect a maximum 30 points. Craig was next after returning a favour to Vanier, securing second spot with a last-lap pass. Vanier was third for the third time on the weekend.

With one round and three races remaining, Ritter’s championship lead now sits at 19 points over Craig while Lobban extended his already commanding lead of the B Class Championship over Lindsay. All will be settled at Canadian Tire Motorsports Park on September 15th and 16th when drivers and teams meet for the final time for the BEMC Indian Summer Trophy Races and the Al Craighead Memorial CanAm Cup.

Free tickets are available at http://www.casc.on.ca/sites/default/files/3_bemc_sept_15-16_2018_wicket.pdf 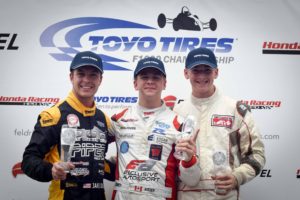 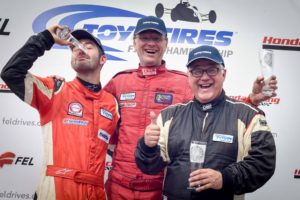