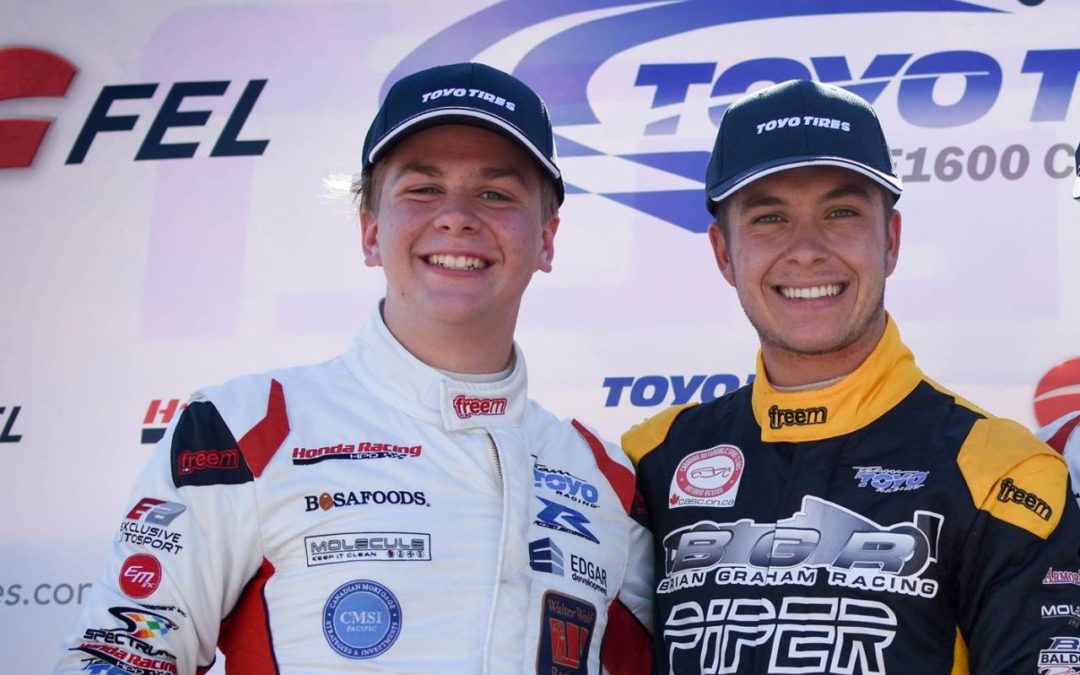 The Toyo Tires F1600 Championship Series kicked off its second half recently as the field returned to Canadian Tire Motorsport Park for the British Automobile Racing Club Touring Trophy Races. Twenty-one drivers were on hand as Jake Craig, fresh from attending the 2018 Team USA Formula Ford Scholarship event at Mid-Ohio, looked to maintain his point lead in Canada over Kellen Ritter and Spike Kohlbecker in a traditional series’ tripleheader.

The weather forecast at ‘Mosport’ was far from perfect and qualifying started on a wet track Saturday morning. The fastest laps in the session then came as it worked to a close, with rain subsiding and the sun poking out from behind the clouds. Kohlbecker was the class of the field in the tricky conditions, taking his first series’ pole by a commanding 2.73 seconds over Exclusive Autosport teammate Ritter. Britain West Motorsports’ Zachary Vanier qualified third ahead Brian Graham Racing teammates Craig and Logan Cusson.

Race one Saturday afternoon ran in dry conditions and Ritter moved quickly to the front of the field. He had the lead by the end of the first lap and never let it go. Craig jumped from fourth to second on the opening lap while Kohlbecker slotted third ahead of Vanier. Ritter was then free to run clear of the field as Kohlbecker and Vanier swapped second spot repeatedly through the opening stages and Craig stayed in touch. Craig passed Vanier for third just before a full course caution then gathered the field back up on lap eleven as Duncan Murdoch had an unfortunate meeting with the wall between turns two and three. The race would sadly end that way, albeit amid some confusion when the pace car pulled in, only to release the field to run under the chequered flag. Ritter and Kohlbecker were one-two, and though Vanier crossed third, a penalty for passing under yellow demoted the rookie and upgraded Craig to the podium.

Kohlbecker was back on pole for race two Sunday morning by virtue of setting the fastest lap in race one, but it was a position lost on the mock grid as his engine failed to fire. The American teenager was then relegated to spectator for the second run, one which turned into a repeat flag-to-flag performance for Ritter. Craig and Vanier were on the tail of the leader for a majority before Vanier upgraded his podium position on the final lap by edging by Craig – this move penalty free and his first podium of the season. Cusson was best of the rest, leading a tight four pack across the line that included the Van Diemens of Shane Jantzi, Graham Lobban and James Lindsay.

The sky looked ominous as the cars lined up on the grid for the final race of the weekend Sunday afternoon. Ritter started on poleafter the entire podium clocked 1:29.7 in the morning run, and the similarity in speed was evident when the race began. The lead was exchanged multiple times over fifteen laps, with the final order being established in the final corner! Vying to convert P2 into a win, Craig looked to go inside on Ritter at the final turn only to have wheel-to-wheel contact launch his Piper airborne! Ritter then held on to win, Vanier capitalized to take second and Craig recovered for the final podium position. Kohlbecker very nearly pipped the spot after a hard-charging drive from the back of the pack though. He took just five laps to dispose of seventeen cars, and was knocking on the door of the lead group when the chequered flag waved. The run did move him to third in the championship, where he now sits with 205 points behind Craig at 271 and Ritter at 292.

The FEL sponsored B Class podium was repeated in all three runs, with Lobban scoring a hat trick of wins ahead of Lindsay and Steve Bodrug. Lobban and Lindsay are also one-two in the B Class standings with Mike Lee third, Bodrug fourth and Kevin Kapelke fifth.

The Toyo Tires F1600 Championship and the chase for the Mazda Road to Indy Scholarship ticket resumes August 24th – 26th as the series makes its only stop at Calabogie Motorsport Park. Entrance for spectators is free, so take a country drive and come see the best open-wheel racing in Canada! For more information on the track and the series, please visit formula1600.com and calabogiemotorsports.com 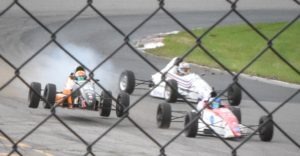