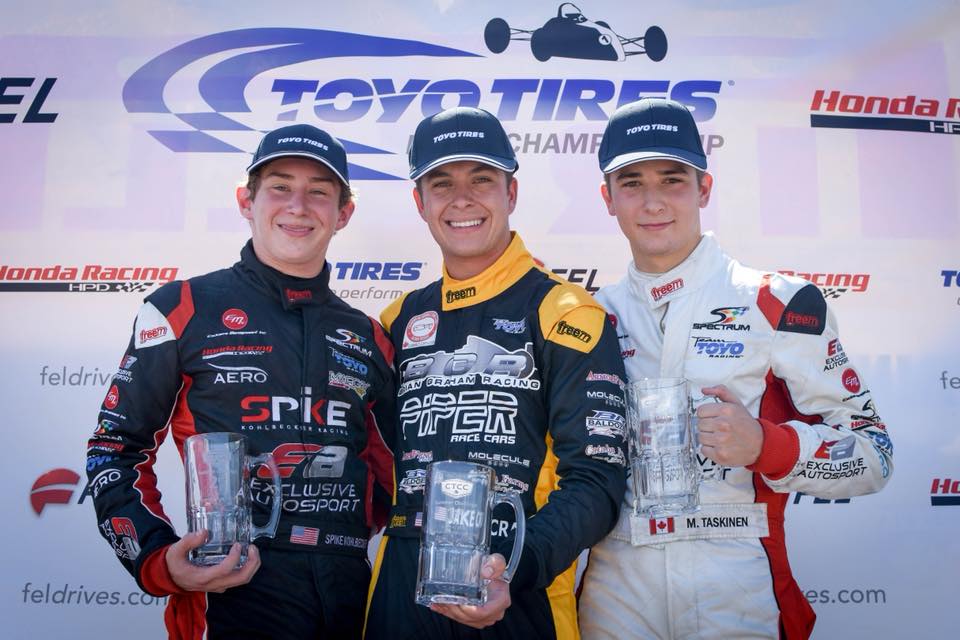 The Toyo Tires F1600 Championship Series has reached its midway point in what is fast becoming the most hotly contested campaign in recent years! A very tight points battle is being produced by an impressive rookie class, one that has seen five different race winners through 3 events and 9 races of the schedule. Jake Craig of Mission Viejo, California, leads the way at the break, followed closely by Kellen Ritter of North Vancouver, British Columbia; Matthew Taskinen of Leduc County, Alberta; and Spike Kohlbecker of St. Louis, Missouri. The international quartet have dominated proceedings thus far, taking 26 of 27 overall podium positions to date!

Canadian Tire Motorsport Park hosted the first two events, with the BEMC Spring Trophy Races opening the schedule in mid May. Running his first full F1600 championship, Taskinen (Exclusive Autosport/Spectrum) was the star of the show, sweeping the three-race format. Teammate Kellen Ritter was on the podium three times as well, finishing second in Race 1 and third in two Sunday starts. Craig (Brian Graham Racing/Piper) began his championship with a pair of second-place finishes, while Kohlbecker (Exclusive Autosport/Spectrum) also had a podium result. Taskinen obviously exited with the point lead, and the players had taken the stage for the season ahead.

Teams and drivers returned to the famed Canadian circuit one month later as part of the VARAC Vintage Grand Prix weekend in June. Past Champion Michael Adams (Flagship Racing Services/Van Diemen) actually showed the rookies the way in the opening race of the event, yet Craig took first-place points in following him to the line as the top finisher in the hunt for the Mazda Road To Indy $200K Scholarship Shootout Ticket. Ritter then became the third different winner on the season in race two of the event, and Kohlbecker the fourth different winner when he won the final start! Ritter ran a podium streak to six consecutive through two events and took over the point lead while Craig extended a consecutive podium streak of his own to five. Kohlbecker added to his total, and though Taskinen was held off the blocks at Event 2, he remained in the championship hunt. Tallies through two were: Ritter 140, Craig 130, Kohlbecker 117 and Taskinen 116.

Each was then looking to produce a big point weekend at Event 3 prior to the Mid-Season break, and each was on the podium during the CTCC Summer Challenge at Shannonville Motorsport Park. Craig closed the gap in taking the first race from Ritter and Taskinen, but Ritter returned the favour in winning the second race from Craig, with Taskinen once again third. The deciding run in the first half of championship then became the most recent race and Craig won it with Kohlbecker second and Taskinen third. Ritter’s consecutive podium streak ended at eight, and as Craig extended his own streak to eight, he took over the point lead, 214 to 202. Taskinen is third with 173 points, and Kohlbecker fourth at 166.

The B Class, for chassis older than 1995, has also had multiple winners, though never at the same event! Three different drivers have produced clean sweeps of the podium through the first 3 events: Kevin Kepelke (Van Diemen), Adams, and most recently defending champion Graham Lobban (Van Diemen). Though each has enjoyed the spoils, it is Lobban that has been most consistent in building a championship lead of 62 points over James Lindsay (Van Diemen), 204-142. Mike Lee (Van Diemen) sits third at 133, and while not contesting every event, Kapelke is fourth at 97 and Adams fifth at 90.